After a bumper season of excitement, drama, blisteringly quick stages and all manner of weather thrown into the mix, its fair to say that the 2022 IPS Packaging Southern 4 Rally Championship has come back with a bang after a lengthy time away. 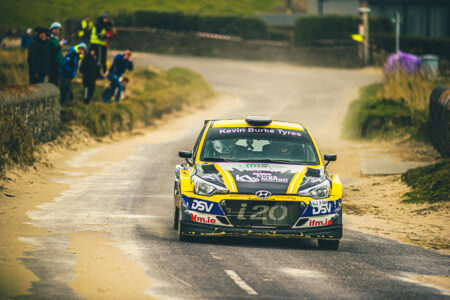 After the enforced absence, this season has seen a record number of registered crews, a raft of new events joining the championship and an exciting new title sponsorship, with Sean O’Carroll and IPS Packaging becoming the new lead supporter of the Southern 4 series.

Having tackled the familiar two-day internationals in West Cork, Killarney and the Cork ’20, as well as the very welcome additions of the Circuit of Munster and Stonethrowers, this weekend in Banna is a fitting season finale for our Main Field and Junior crews.

What is known, for definitive, is that we witnessed once of the most relentless marches to championship victory ever seen in Irish Rallying, with Josh Moffett and Andy Hayes claiming the 2022 Southern 4 crown in imperious fashion. Never finishing lower than 2nd on any round of the series, the pair have claimed the top spot before the final event here in Kerry.

The chase for the next two runners up spots is still very open in both the Driver and Navigator overall tables. For the wheel men, 2019 Champion David Guest has a points advantage over two championship debutants in Callum Devine & Merion Evans, while in the Co-Driver stakes it’s a tight shootout between Jonathan McGrath, Jonathan Jackson & Eoin Collins.

While the overall title is wrapped up, there are plenty of very tight fights left to be played out on the North Kerry lanes. In Group 3, aptly just three points separates leader Cyril Casey from John O’Rourke, the Casey’s looking for a family double with Shane having already wrapped up Group 5. In Group 6, it’s a duel between Raymond O’Neill and Bob Moran, with the advantage between the pair standing at just a single point in favour of O’Neill.
After missing the first four point-scoring rounds, Thomas O’Rourke has roared back into Group 8 Contention, and leads Andy Heekan by 3 points, while Llyr Jones and Mark Dolphin hold unassailable leads in Groups 9 & 10.
The IPS Packaging Southern 4 Rally Championship Junior Championship is reaching fever pitch, with the lure of a prize package to the value of 2023 S4 Junior Entry Fees seeing eight future stars of the sport sign up, but only two remain in the hunt heading to Banna. The Drop-Scores have left Garry Healy with a seven-point lead over Anthony O’Driscoll, while Evan McEvoy and Jason Farrell have a real battle for third place.

Once everything is wrapped up, the 2022 season will be celebrated with the annual Prize Giving, taking place this year in the Celtic Ross Hotel, Rosscarbery, West Cork on January 7th 2023. All the info on this event will be available soon through the Southern 4 Rally Championship page on Facebook, or at S4RC on Sportity.