The freezing winds and heavy rain could not deter the large crowd who
gathered for the Annual Bandon Easter commemoration which took place
at the republican plot in St Patrick’s cemetery on Sunday last.

A sea of umbrellas made up the procession that followed the Bandon and
District Pipe band.Local councillor Rachel McCarthy and Aengus Ó Snodaigh
TD headed the procession.

Wreath laying and a reading of the proclamation was followed by the main
speaker Aengus Ó Snodaigh TD.

Over howling winds Deputy Ó Snodaigh reminded the crowd of the sacrifice of
the men and women of 1916, he highlighted the bravery of republicans down
through the years and the importance of keeping the memory of Irelands past
alive.

He encouraged everyone to reread the Proclamation and stressed the vision
of the signatories’ and the relevance of the ideals contained in it to the
Ireland of today.

Speaking following the ceremony local Sinn Fein Cllr McCarthy said;
“We are absolutely delighted that so many people decided to brave the elements
today, it is an indication of the importance of this commemoration to the people
of Bandon and surrounding townlands. It is especially encouraging to see so many
young people and new faces at this years event.”

“Aengus gave us all food for thought today; he reminded us that once again
we are at an important juncture in the history of this island and once
again we are faced with choices that will have huge ramifications for the
generations to come.

Do we continue to accept a situation where ordinary working people pay for
the mistakes and greed of the banker class? or is there something we can do
as Irish citizens to end to the unjust and failed policies of the current
and previous governments.” 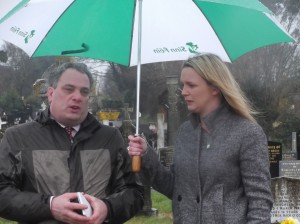