Mr. Padraig Aherne’s voluntary work as a teacher of adults with severe disabilities earned him a Cork Person of the Month award, meaning also he has a
1/12 chance of collecting the overall Cork Person of the Year award for 2013 at the Ceremony in Jan 2014.

When Padraig Ahern retired from St. Patrick’s School, Montenotte, eight years ago, he continued working with Cope Foundation on a voluntary basis.

He has been involved in a weekly Social Club for adults with disabilities for over forty years and helps organise ‘big party nights’ on special occasions, like Halloween, Christmas and Summer. All this work earned Padraig the June Cork Person of the Month award and his name now also goes

forward for possible selection as Cork Person of the Year at a Gala Awards Lunch at year’s end.

Now living in Montenotte, his other voluntary work, involves Special Olympics, where he was co-ordinator for the hockey programmes in Munster and

presently he is promoting the new sport of Floorball all over Ireland. “Padraig Aherne is a truly inspirational figure and has amazing communication skills with people with the most profound and severe disabilities, which makes him a great teacher at Cope Foundation” said Lorna Hughes who nominated Padraig for the award. 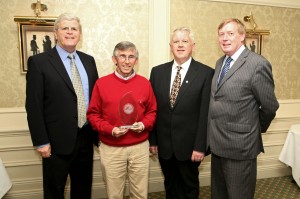