Fuzion Communications located on South Mall in Cork’s City Centre were
crowned winners of the Excellence in Communication Award, at last
night’s Chamber Ireland Corporate Responsibility Awards 2013. Beating
off some strong competition from big brands including the Dublin
Airport Authority, O2 and Ulster Bank, the reputable PR Company won
the award based on their highly acclaimed and now famous ‘safebook’
campaign.

The ‘safebook’ campaign was developed in response to the issue of
cyber bullying in social media. Fuzion created a simple info graphic
called ‘safebook’ which promotes the safe use and provides tips to
those who are facing abusive behaviour online. By using a combination
of design, PR and social media skills, Fuzion has successfully reached
a wide target audience; reaching 500,000 people globally within the
first 48 hours. Fuzion made this info graphic easy to share and has
been adopted as a resource by the National Association of Principals
and Deputy Principals and will be used in all schools beginning in
September 2013.

Speaking about their win, Greg Canty Director of Fuzion PR said “The
great thing about running your own business is that we can get
involved in various pro-bono projects without having to look for
anyone’s approval – if it’s something that we feel is a worthy cause
and we can make a significant contribution we just jump in. We have
been doing this for years on many different projects and it is really
great that the work we did on the “Safebook” cyberbullying initiative,
which has made a huge impact in Ireland and abroad has been recognised
by Chambers Ireland”

This year marked a record number of applications and the largest
number of new entrants since the awards began. John Cunningham, chair
of the judging panel says “These awards continue to give us the chance
to recognise the work that the business community does in relation to
the local community, their employees, their stakeholders and their
overall sustainability. CSR is often seen as going the extra mile and
their no doubt Irish businesses have embraced that motto.”

The renowned ‘safebook’ campaign is now being used worldwide; 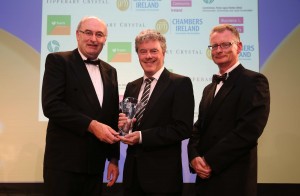