Speaking after yesterday’s event which was attended by close to 500 people the Lord Mayor stated:

“When this event was in its planning stage we anticipated 150-200 people might attend and take part. It became clear in the last fortnight, judging from the interest shown, that those estimates would have to be revised to 300. We were delighted by yesterday’s turnout of close to 500 people and hugely encouraged that so many people attended and took such an active part in the discussions.”

“I would like to use this opportunity to say a special thanks to the staff of Cork City Council and the statutory agencies involved in the planning and delivery of yesterday’s event and to pay special tribute to them and to An Garda Síochána and SHARE who helped co-ordinate the logistics of coping with the unprecedented increase in numbers at short notice.

I feel certain the event will ensure the active voice of older people in planning and decision-making and clearly define Cork’s strategy in the city development plan 2015 to 2021. 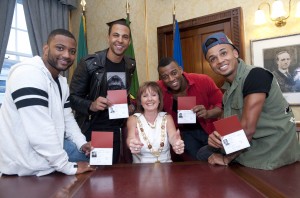 Lord Mayor Cllr Catherine Clancy has invited young and old into
Cork City during her tenure.
Above is a file photograph of boy band JLS visiting
earlier this year.