The four-star Talbot Hotel Group has announced the
purchase of the Midleton Park Hotel in Cork and has announced details
of plans to invest 1million in the property.

The Wexford based hotel group, which comprises of the Talbot Hotel
Wexford, The Talbot Hotel Carlow and the Stillorgan Park Hotel in
Dublin is owned by the Pettitt family, whom also own the Pettitt’s
Supervalu supermarket group.

Commenting on the acquisition Managing Director of the Talbot Hotel
Group Philip Gavin said, “We are delighted to be adding the Midleton
Park Hotel to the Talbot Hotel Group, It is one of Cork’s best known
hotels. We are looking forward to working with all of the team at the
Midleton Park and also on improving the Hotel and taking it to the
groups’ standard of four stars.”

According to Mr Gavin the Talbot hotel Group will be investing heavily
to secure the future of the hotel, “The purchase of the Midleton Park
by the group really rubberstamps its future. We will be investing a
significant sum in the region of 1million into the property and
securing the future of the 80 employees at the hotel plus we will be
adding to that number of employees throughout the renovations and
upping the number of seasonal workers during holiday periods. We have
some great plans in the pipeline to develop the hotel and it services
for hotel guests and the people of Midleton. We are planning
improvements for the Function room, Restaurant, Bedrooms and Lobby. We
also feel that our customers at the Talbot Hotel Group will value this
new addition to the group’s choices.

We will commence with substantial investment in the wedding and
conferencing facilities and we have some very exciting and elaborate
plans which have already been designed.” Mr. Gavin concluded.
The Midleton Park Hotel has 79 well-appointed guest bedrooms two
executive suites and a presidential suite, conferencing and wedding
facilities and a gym and swimming pool along with a hotel Spa. Cork
man Patrick Shields will manage the Midleton Park Hotel.

Patrick Shields was born and raised in Carrigaline, Co. Cork. Patrick
developed his career at home in Cork as well as in America and
Australia over the past ten years and has gained experience at some of
the worlds top properties including the Kingsley Hotel and Residence
and Carlton Hotel and C Spa Kinsale to name but a few. Patrick joins
the Midleton Park at an exceptionally exciting time for the hotel, the
town and Talbot Hotel Group with the objective of achieving 4 Star
accreditation and further developing links with the community and
beyond.

The Talbot Hotel Group currently employs over 400 people at their
Wexford, Carlow and Dublin based hotels with an additional 400
employed across the Pettitt Supervalu stores with a combined turnover
of 108 million recorded across the Talbot Hotel and Pettit Supervalu
groups at year end 2012. The group underwent enormous expansion with a
EURO 40 million investment in the construction of the Talbot Hotel in
Carlow and redevelopments in both the Talbot in Wexford and The
Stillorgan Park Hotel and the Pettitt group also recently invested
2million in its supermarket in Athy County Kildare. 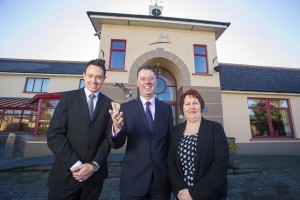