The 27 year old has put pen to paper with the club and manager John
Caulfield hopes the left sided player will be available for selection
for Monday’s game against Limerick. Commenting on the signing,
Caulfield told CorkCityFC.ie that he believes Davoren will be a good
addition to the squad: “”I’m really delighted to sign Iarfhlaith. He’s
been with Sligo for the past number of years, and he’s a very good
player. I think he’s the type of player, and has the type of mentality
and attitude, that I feel will enhance our squad.”

“Our panel is tight, particularly given the injuries we have, so to
get an experienced player like him in at this stage is great for us.
I’m looking forward to seeing him in training on Sunday and I hope he
will be a big success for us.”

“He’s very versatile; he can play left-back or left-wing and has also
played up front. He has a lot of experience; he has been in the league
for a number of years. We need to bring in guys with the right
attitude to mix in with the group we have and I think he is that type
of player.”

Davoren, who won a number of trophies during his spell with Sligo
Rovers, told CorkCityFC.ie: “I am delighted to be joining such huge
club. Having spoken to John, I think I will fit in well with the way
he wants to play and I share his ambition to win trophies.”

Asked about his success at Sligo, and if he felt he could replicate
that at Cork City, Davoren said: “The squad is excellent; obviously I
know Matt Gledhill and Anthony Elding from Sligo. If we can maintain
some of our momentum there is no reason we can’t challenge. I’m
looking forward to settling in, and getting back on the pitch.” 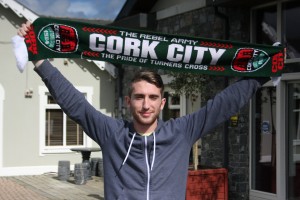