In Business owning the supply chain is beneficial. So if you own a
Newspaper you should own the press also.

A West Cork fishing family, the Murphys, who own Murphy’s Irish
Seafood, have decided instead of solely [pun intended] selling their catch
to other Restaurants they have opened their own Restaurant called
“Trawl and Trend” on High Street in Bantry.

Trawl and Trend aims to offer the freshest of produce and to present
seafood straight from the trawler to table, with the minimum of delay
as the owners have their own fish processing business.

The modern restaurant serves fresh local produce with a special
emphasis on seafood from the Murphy’s Gearhies based fish processing
facility. The family desired to have somewhere local people could
taste their high end fish products which are exported across the
world. The restaurant is run by Gareth Murphy and his team.

As well as seafood and meat dishes, the restaurant has a good café
serving Badger and Dodo coffee and 21 different flavoured teas. Its
breakfast menu offers cider boiled, honey and mustard roasted ham with
poached eggs served on brown bread with Ballymaloe relish

Its chowder has built a sterling reputation given the access to
Murphy’s Irish Seafoods products. The Murphy family’s own mussels are
a specialty, chosen by locals and visitors alike. Through the day it
has eight different seafood or meat/salad options from crab claws,
prawns and fish to wings and meatballs. A wide selection of wines
are available.

Trawl and Trend has gone from strength to strength since opening.
Originally a daytime cafe and restaurant, it has expanded its
restaurant to become Bantry’s first tapas and wine bar at the weekend
and will open nightly from Easter.

The tapas menu is Spanish influenced with a West Cork Twist through
the best local ingredients and cheeses. The venue transforms on
Fridays from 6.30 into a restaurant and lounge setting with live
acoustic music. Aided by dimmed lighting, at night time the
restaurant, cafe and wine bar mood is intimate and relaxed. West
Cork’s first bean bag wine lounge will open there in the Summer. 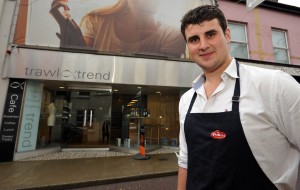