Concern has again been raised over the status and appearance of
iconic “Shakey Bridge” off the Mardyke, to the West of Cork City.

The 160-foot white structure is an important gateway for tourists walking
from Fitzgerald’s Park to the old City Gaol in Sunday’s Well.

But there is corrosion on the steel lattice-work, and the wrought iron
sections need to be re-painted.

Officially known as Daly’s bridge the shortcut across the North
Channel of the River Lee was built in 1926, and is the City’s only
suspension bridge.

Cork City Council have been refused Government funding under the
“Specific Grant Improvement Scheme” for this year. 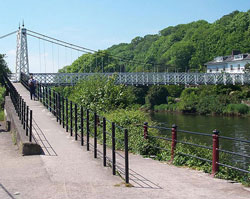