It employs 560 people but says investment in new editorial production,
advertising and finance systems
means work practices are changing, and around 10 percent of it’s workforce
have to be left go.

Around 25 of the job losses will be in Cork, and the other 25 at the
regional titles.

Outside of Cork the titles owned by Landmark media include The Western
People; Wexford Echo, Waterford News and Star; and the Roscommon Herald.

Commenting on the job losses… 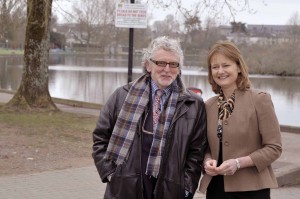 Photo of Billy macGill. Mr macGill also is running for a seat
on Cork City Council as a Fine Gael Candidate. Above he is pictured
with party colleague Senator Deirdre Clune who is running for
a seat in the European Parliament.