24th May 2014
By David O’Sullivan
david@TheCork.ie

Ireland Consular Corps has an existing arrangement with Mercedes Benz, through MSL Ballsbridge Motors and MSL Cork, with the Dublin dealership being the main sponsor of The Diplomat Dinner 2014 which is Ireland’s largest diplomatic dinner and networking event. Prior to this the event was sponsored by BMW Ireland through their diplomatic agency with Frank Keane BMW. The Diplomat Dinner 2014 will take place in Cork on Friday October 17th 2014 with the CEO of Australia’s Qantas Airways, Alan Joyce as Guest Speaker. An Taoiseach Enda Kenny TD has been invited as Guest of Honour for the black tie international event, which will host up to 500 guests from countries across the globe, including up to 100 Ambassadors, Honorary Consuls and international representatives.

Speaking at the announcement, the Executive Director of Ireland Consular Corps and Honorary Consul of Poland, Michael Mulcahy said “our members represent over 60 world countries and governments and the role of an Honorary Consul involves representing citizens of that country in Ireland as well as the promotion of Ireland in these countries and encouraging foreign direct investment into Ireland. Developing a relationship with specific motor brands in Ireland for our members is important and incentivising our members to drive particular brands of cars is beneficial to the motor industry in Ireland which has made great progress in rebuilding its industry. We look forward to working with a variety of brands in all price brackets and playing our part in the rebuilding of the Irish motor industry and we believe that this initiative may be worth up to €5m a year to the motor industry in Ireland”. 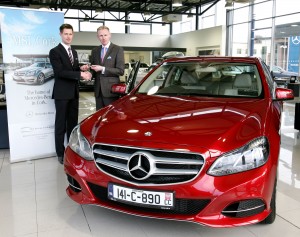 Cork based Consular corps arranges car deal for Diplomats and Consuls added by TheCork.ie on 24th May, 2014
View all posts by TheCork.ie →