Derval O’Rourke has a message for non-profits

Olympic athlete Derval O’Rourke today called on Cork voluntary and non-profit organisations to apply for funding before the June 29th deadline. €125,000 is available from the Coca-Cola Thank You Fund for projects that reflect new ideas to get people more active, more often. 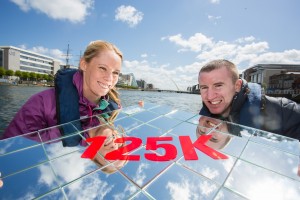 Derval O’Rourke, Coca-Cola Thank You Fund ambassador, said: “I’m hoping to uncover some fantastic community initiatives that make it possible for the public to access activity programmes within their locality, and would urge all organisations with ideas for ways we can all get more active to apply now.”

Olympic boxer Paddy Barnes joined Derval in calling on Cork organisations to apply and said: “At the moment I’m preparing for the Rio Olympic Games and my focus is on getting into the best shape possible and achieving my peak fitness level. I’m constantly struck by the level of interest there is out there in staying active – from fellow athletes, but also the wider public. The Coca-Cola Thank You Fund is great because it’s giving people the opportunity to take part in physical activity in the communities where they live. For anyone who has an idea to get people moving, we want to hear from you! Apply for funding at coca-cola.ie/thankyou.”

The Fund would like to hear from a broad range of organizations with novel ideas to motivate their community, or indeed the whole country, to get moving. Projects can involve traditionally popular sports or newer forms of physical activity. The Fund is searching for organisations that have the passion and energy to get a new project off the ground and get people excited about taking part.

The deadline for applications is Monday 29th June at 6pm. After that, a shortlist of twelve organisations will be announced and those groups will be invited to meet the judging panel.

The shortlisted organisations will present a 10-minute pitch to the judges about their project and why they think they should receive the funding, followed by a further 10-minute Q&A session with the panel. The five winning ideas will be announced in October 2015.

Applications for the Coca-Cola Thank You Fund 2015 can be made at www.coca-cola.ie/thankyou.