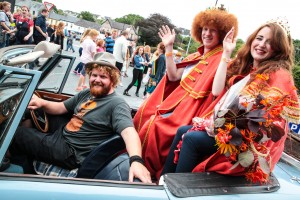 The sixth annual Irish Redhead Convention got off to a fiery start yesterday afternoon! Hosted in the coastal village of Crosshaven, crowds of gingers from all over the globe arrived, some with their redhead-appreciating friends, to enjoy the weekend red fest.

Highlights of the Convention so far include the Red Crawl, a tour of all the pubs of Crosshaven, a wonderful musical lineup, and a craft market where all our official merchandise is selling out fast, including the much wanted “It’s a ginger thing, you wouldn’t understand” mug!

Looking ahead for the rest of the red-weekend, Convention attendees will be lucky enough to enjoy a seminar with Jacky Colliss Harvey about her new book, Red; the competitive Carrot Tossing Championships; the very unique way to meet your perfect match, Ginger Speed Dating and a musical lineup that’s sure to please the crowd along with redheadliner, Mary Coughlan!

And of course we cannot forget competition time and the much coveted titles of King and Queen of the Irish Redhead Convention!

And the winners are…

Following the title announcements and coronation of our new King and Queen, the ginger crowd took to the streets for one of the brightest parades around showing off how special it is to be a redhead.

Grainne Keena, the new Queen of the Redheads said: “It’s a true honour for me to be representing fellow redheads and I’m really happy to be a representative. I can’t wait for the year that follows and I’d like to say to every ginger out there to embrace their natural gingerness and to know it’s a true asset and a beauty to be very proud of.”

Emma Kelly, founder and editor of the Ginger Parrot, said: “It’s mind blowing that so many redheads can come together and show the rest of the world that they should be jealous.”

Joleen Cronin, organiser of the Convention, said: “It’s been overwhelming the amount of people that I’ve seen here this weekend. It’s incredible to see so many familiar faces and so many new faces.

“I’m excited about tomorrow’s program and I can’t wait to see Mary Coughlan!

“Thank goodness we have so much sunscreen today because the weather was amazing, we were blessed with the weather!”