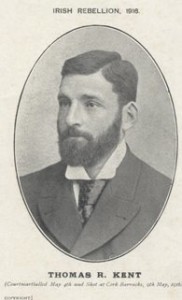 Kent (Irish: Tomás Ceannt; 29 August 1865 – 9 May 1916) was an Irish nationalist who was court-martialled and executed following a gunfight with the Royal Irish Constabulary (RIC) on 2 May 1916, in the immediate aftermath of the Easter Rising.

The main railway station in Cork, Kent Station is named in his honour (Kent Station).

On the day before the upcoming state funeral – Thursday 17th September – his remains will arrive at the Chapel in Collins Army Barracks and following a private family sitting, a prayer service will commence at 6.00pm to which members of the public are welcome (do note that access will be dependent on space). On the same eve, the Barracks and Chapel will remain open to allow all members of the public to pay their respects.

The State Funeral on September 18th will commence at 1.45pm in St. Nicholas Church, Castlelyons. The Church can only accommodate a limited number of people and provision has therefore been made for public viewing of the Funeral outside of the church (an area will be set aside with limited covered seating).

The proceedings will be broadcast live on RTE 1 TV and it is anticipated that the ceremony will conclude at approximately 3.00pm, followed by the re-internment of remains at the Kent Family Plot located on site. The re-interment will feature the key elements of a State Funeral including a Military Firing Party rendering honours, the Last Post, the Reveille, and the National Anthem. Accompanying music will be provided by the Cork Prison Officers Choir and the Army Band.