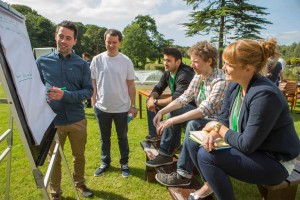 As part of the nationwide search to find ‘Ireland’s Best Young Entrepreneur’, the three Local Enterprise Offices (LEOs) in Cork launched a campaign in June to find the best young entrepreneurs in their region in three distinct categories, with a €150,000 investment fund up for grabs.

From September 4th to 6th, 45 young entrepreneurs, shortlisted from almost 150 applicants, came together for an intensive business boot camp, in association with the LEOs, held at Fota Island Resort.

The boot camp was designed to help participants to develop the skills required to take their entrepreneurial ideas and businesses to the next level. From the concept stage to reality, and building a viable business plan to commercialising their business, the boot camp covered areas including business strategy, financial planning and sources of finance, targets and performance measurement as well as investor proposals.

This is the second year of the competition, which was open to individuals aged 18 to 30, and sees each of the three LEOs having a total fund of €50,000 to invest in the three winning businesses, under the following categories:

Each of the young entrepreneurs who attended the boot camp will present their business plan and pitch to a judging panel in their region in the coming weeks to vie for a share of the investment fund available from their LEO. Each of the three LEOs (Cork City, South Cork, and Cork North and West) has a total fund of €50,000 to invest in three winning businesses according to criteria including businesses’ investment needs and business prospects; with the overall county winners eligible for an investment of up to €20,000.

The county-based stage of the competition will culminate with the naming of the nine ‘Best Young Entrepreneurs’ in Cork (3 per LEO) at the county final which will be held in The Atrium at City Hall, Cork on October 8th.

The 2015 winners in each of the three categories will then go forward to represent their respective LEO in a regional final in November, and if successful there, will fly the Cork flag at the national final to find ‘Ireland’s Best Young Entrepreneur’ before the end of the year.

Speaking at the boot camp, Sean O’Sullivan, Head of Enterprise, Local Enterprise Office South Cork said “We are delighted with the response we received for the 2015 search for Cork’s best young entrepreneurs. Now in its second year, the competition has once again unearthed a wealth of young entrepreneurs in the region who we need to nurture and support. The aim of this initiative is to encourage and support a culture of entrepreneurship among young people in Cork, to promote entrepreneurship as a career choice, and to encourage the establishment and development of new innovative businesses. This is hugely important for job-creation, as two thirds of all new jobs are generated by businesses in the first five years of existence, and therefore more start-ups and a thriving entrepreneurial culture will lead to more jobs being created.”

Sean continued “These brave young men and women have decided to take that next step to make their business a success. The business boot camp offers the shortlisted applicants the opportunity to hone in on their business idea, and focus on what is necessary to make them successful. Following the boot camp, one-to-one mentoring and business coaching will also be available through us. At the Local Enterprise Offices in Cork, we are proud to be associated with an initiative that will really help launch them to the next level.”

‘Ireland’s Best Young Entrepreneur’ is part of the Action Plan for Jobs and was launched in May by An Taoiseach Enda Kenny. T.D. and the Minister for Jobs, Enterprise and Innovation, Mr. Richard Bruton T.D.

Visit www.ibye.ie for more information on ‘Ireland’s Best Young Entrepreneur’. To follow the progress of Cork’s young entrepreneurs, check out @IBYECork on Twitter and IBYE Cork on Facebook.