Cork City W.F.C. are delighted to announce that Maggie Duncliffe has signed for the club for the upcoming season. 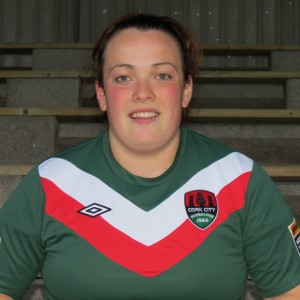 The combative midfielder signs back for the club having been a consistent and impressive performer last season in a side that struggled on occasion. She provides even more competition in a strong panel of midfielders that manager Niall O’Regan has signed. Commenting on her signing, O’Regan had this to say “I am delighted to have Maggie come on board for the coming season, she is an experienced Women’s National League players who is an excellent addition to the squad.”

“Maggie has a real and genuine personality and the entire squad enjoys the positive atmosphere she creates in and around training. She had a spell at player management this year and this will help us having another leader within the group – I know she will be a brilliant addition for the coming year”

Speaking upon signing up for the coming year, Maggie said “I am looking forward to the new season, and signing for Cork City is a positive step in the right direction and it will improve me as a player as well as being able to learn new things from Niall and the gang. The players that have signed this season show the level of talent in cork and it will be exciting to see how this season plays out. Training has been amazing so far and hopefully we take what we learn onto the pitch with us and win games.”

“It’s exciting to see how well we’ll do and where we finish and what way the season goes especially with the new management and the great work their doing so far, you’ll never know this could be Cork’s year.”

Cork City W.F.C.’s next game is at 2pm this Sunday 13th September in Jackson Park against UCD Waves in the second game of the Continental Tyres Women’s National League Shield. The Leesiders top the group after one game having beaten Kilkenny United by four goals in Bishopstown Stadium.

Cork City W.F.C. have also announced an upcoming table quiz at 8 o’clock in the Briar Rose, Douglas Road (next to the former Ardfallen Motors) on Friday the 18th September 2015. Entry will be €50 per team with a food and a bonus raffle included.