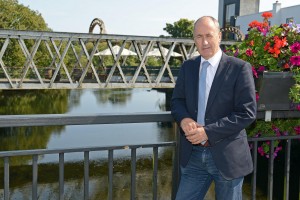 The proposed major flood relief scheme is funded by the Office of Public Works (OPW) and the lead agency is Cork County Council (CCC). Having completed the tender process the Council sent the details of the recommended tender to the OPW for their approval on July 17th.

The Council have since been informed that there is now an extra new step in the process whereby the OPW have to submit the tender to the Department of Public Expenditure and Reform, who will employ consultants to further evaluate the Environmental Impact Statement (EIS).

The net result is a delay for the people of Skibbereen.

“At this stage no timeframe has been given for this new step in the process. CCC’s consultants have already evaluated the EIS and this seems to be just an unnecessary bureaucratic delaying tactic and not the type of “reform” expected from Labour party Minister Brendan Howlin’s Department. This is an obvious contradiction by the Minister as this is absolute waste of taxpayers funds and a duplication of resources with a second EIS. “

Cllr Coleman continues by stating that

“In essence I feel that Minister Howlin simply does not have the money to commit to these flood relief projects in West Cork . An unfulfilled promise is being camouflaged by unnecessary bureaucracy”

This scheme estimated to cost in the region of €14 million is in planning since 2010.

“If urgent action is not taken another potential flood may not be prevented and householders and business owners in Skibbereen will be victims once again .”

Meanwhile the OPW who are the lead agency in the Bandon Major Flood Relief scheme have not put the project out to tender yet 18 months after their botched attempt to put it to tender In spring 2014.

Cllr Coleman is most concerned for the people affected in these towns.

“Moves to protect Businesses and householders in these towns are being ignored as these necessary works are being procrastinated .This is neglect by Minister Howlin”