Statue of Sonia O’Sullivan to be unveiled in Cobh 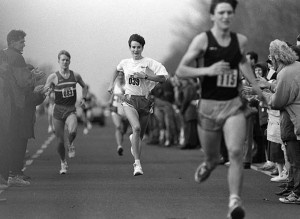 Foreign visitors to Ireland often notice a lack of patriotic statues. There are holy statues of course, but few statues of people who lived in the past few hundred years. There are historical reasons for this, related to Ireland’s independence story, and the sometimes delicate relationship with the United Kingdom.

Statues have been politically sensitive

Many statues in Ireland of British personages have, over time, been taken down, or blown up.

Indeed, the last royal statue to have been erected in Ireland was banished to a storage yard post Independence, and later sent to Australia. The bronze Statue of Queen Victoria, currently in Sydney, outside the Queen Victoria Building (an upmarket indoor shopping arcade) was made by John Hughes in 1908 and was originally located in Dublin.

Nelson’s Pillar in Dublin was a large granite pillar topped by a statue of Horatio Nelson in the middle of O’Connell Street. It was built in 1808–1809, and was among the first and grandest monuments erected in memory of Nelson in the then United Kingdom. It survived until March 1966, when it was destroyed by a bomb planted by Irish republicans. It was eventually replaced by the non-political, non-militaristic “Spire of Dublin”.

Well, a new statue is coming to Cork, and it’s of a Sports star. Sports, of course, unites people, so there will be few objections.

Cobh Tourism will life size bronze statue of local hero Sonia O’Sullivan in Cobh this Sunday, 20 years after her Gold Medal Win at the 1995 World Championships in Gothenburg.

The statue will be unveiled by Sonia herself at 3pm, who will be accompanied by her family and friends including husband Nic Bideau and their children Ciara and Sophie, and the public are invited along to show their support.

Commissioned by Cobh Tourism, the statue is situated in the centre of the town, close to Titanic Experience Cobh, with the iconic St. Colman’s Cathedral in the background, and it will provide a great photographic opportunity for visitors to the town.

“This statue captures the determination and spirit of Sonia and celebrates her achievements over a long and glittering career. It also conveys the immense pride that the people of Cobh and Ireland have for our greatest ever athlete. We hope the public will come along in their droves on Sunday to honour a great local hero.”

“The pose chosen, minute detail and the immense talent and patience of Cobh sculptor, James McLoughlin, means that this statue will tell its own story to visitors and locals alike”.

“tourists want real experiences – they want to get a feel for a place, understand the story of a town and its people, and what makes it tick. Cobh is full of experiences and stories, but the story of Sonia O’Sullivan and her athletics career, her tremendous successes, many disappointments and the trials and tribulations of a glittering career is a story that carried the people of Cobh and Ireland along with her for over a decade. It is a happy story and this statue will reflect that, celebrating a Cobh native who has been a tremendous ambassador not only for her sport but for her home town Cobh and Ireland.”

Cobh Tourism led the campaign to acknowledge Sonia O’Sullivan’s achievements in her home town. The support of Cork County Council, Cobh Credit Union, local businesses and clubs and organisations made the statue a reality in a very short time.

Cobh Tourism hope that the public turn out in huge numbers to support the Sonia 5k Road Race on Saturday 19th at 6pm and the unveiling of this “magnificent work of art” – in the words of the organiser – right in the centre of the beautiful town of Cobh on Sunday. With the town bedecked in bunting, the Band of 1 Southern Brigade will be on hand to entertain from 2.30 pm.