Rosemary O’Neill, daughter of Tip O’Neill, the late Speaker of the U.S., Congress, paid a courtesy visit to the Lord Mayor of cork, with a delegation from Mallow, the ancestral home of the O’Neill family.

She will attend the Thomas Kent funeral in Cork this weekend and a celebration of her fathers public life in a ceremony in Mallow Library on Saturday. 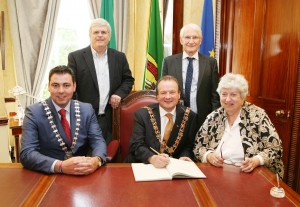 Factfile: Who was Tip O’Neill? 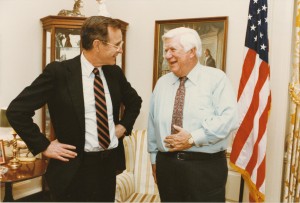 Thomas Phillip “Tip” O’Neill, Jr. (1912 – 1994) was an American politician and Speaker of the United States House of Representatives. O’Neill was an outspoken liberal Democrat and influential member of the House, serving for 34 years and representing two congressional districts in Massachusetts.

He served as Speaker of the House from 1977 until his retirement in 1987, making him the only Speaker to serve for five complete consecutive Congresses, and the second longest-serving Speaker in U.S. history after Sam Rayburn.