This year’s coveted eir Spider Grand Prix has been awarded to NewsWhip; the global social media monitoring company that created a technology platform called Spike to track activity across a range of channels, in an effort to determine what stories are generating the most online discussion. The eir Spider Awards, which celebrated their 20th anniversary this year, took place in Dublin’s DoubleTree Hotel last night. The Awards, hosted by Jennifer Maguire and Bernard O’Shea are regarded as the most influential and iconic digital awards in Ireland and were created to reward and celebrate Irish businesses and community organisations for digital excellence.

NewsWhip, which has offices in Dublin and New York, uses data analysis tools to identify the most relevant stories for their audiences each day. Using videos, social media footprint and content Spike can accurately predict over 79% of viral stories gathered in the first hour of publication. Described as a filter of the world of news, Spike from NewsWhip detects millions of new stories, pictures and videos daily and provides its customer with real time information, insights and trends. According to the Judges, NewsWhip was a front runner for the Grand Prix award from the start. They showed a clear understanding of technology and designed a sophisticated yet simple website that demonstrates their digital credentials. As a business the Judges believe that they have used technology extremely successfully to date but also have the capacity to evolve and grow at a global scale in the coming years. 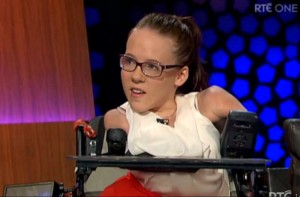 Above: File photo of Joanne O’Riordan

Joanne O’Riordan was presented with the Outstanding Contribution to Technological Empowerment Award which was regarded as one of the most important awards of the night. Joanne, Ireland’s leading digital rights activists was born without arms and legs and is one of only seven people worldwide living with this extremely rare condition called Tetra-amelia syndrome. Joanne was at the event to talk about the ongoing importance of technology in her life and the progress that is being made by Trinity College in creating a robot to help her with everyday tasks.

Chairman of the judging panel and Director Sales, eir SME, Gary Disley commented, “eir has been supporting the Spider Awards for 15 years now and each year we’re genuinely impressed with the quality of entrants. This year is no exception and it is exciting to get the chance to judge such a range of innovate and interesting businesses – from the start ups through to established companies. We’re seeing many Irish digital businesses not only embrace change but are position themselves as global leaders in their field and the winners tonight are truly deserving of their awards”.

In total, 20 awards were presented on the night honouring online and digital achievement in categories such as e-retail, business-to-business, creative technology, financial services and education. There were four new categories which include Best Acquisition Campaign (Swiping Out Sex Trafficking), Best Online Customer Service or Best Online Retention Campaign (CurrencyFair), Best Use of Mobile Technology (Dublin and Cork Airport Apps) & Best Digital Start up (Webdoctor.ie). The new categories are reflective of the constantly changing and increasingly competitive environments that Irish businesses operate in.

The 2015 eir Spider Awards were hosted in conjunction with Business & Finance Magazine.

For further information on the awards please visit www.eirspiders.ie