The threat of homelessness faced by low income families struggling with ever increasing rents and greatly increased living costs is even bigger than the current homelessness crisis. The Society of St Vincent de Paul has spent in excess of €6.2 million assisting people throughout Cork in the past year. “Most of those who seek the support of Saint Vincent de Paul are struggling week in week out on a basic minimum income, either from state payments or from low paid employment. It is when they encounter an unexpected cost or a period when additional expenditure occurs such as Christmas that they critically need SVP which now spends an average of €40 million per year nationally in direct assistance, primarily on food, energy, education, clothing and furniture. 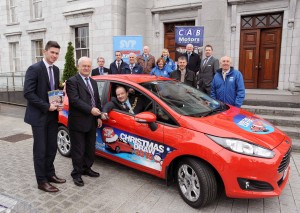 It can still take just one small problem to tip a family into a crisis. We want to emphasise that we are here primarily to help people over a hard time and sometimes that is sufficient to ensure that they don’t slip into long term poverty. We know that a little help at the right time can change everything for someone in crisis.” – quoted Kieran Stafford National SVP Vice President at their Annual Appeal launch.

Gerry Garvey, SVP South West Regional Coordinator said : “In 2014 our 102 local visitation conferences provided assistance on more than 89,450 occasions across the region of Cork and Kerry. Approximately 76% of support was provided to families, many of whom required assistance on numerous occasion throughout the year with basic necessities such as Food and Fuel. Education proved to be another significant need with our conferences spending in excess of € 176,000 last year. Education is one of our key focus areas as it is regarded as the key to unlock recipients from the poverty trap and has far reaching benefits both for the individual and their family.“

Seven years of recession and dramatically increased calls to the Society for assistance have exhausted our funds and reserves in the region. We depend almost entirely on donations from the generous Cork public and corporate supporters in order to be able to continue our work. Our current funding will run out before Christmas. We are now appealing to you today for an even more generous response in supporting our Annual Appeal and Car Draw. The Annual Car Draw is one of our most important fund raising initiatives and we are delighted with the support of CAB Motor Group, Cork who have again this year donated the first prize of a new Ford Fiesta to assist us in our fund raising efforts.

Funds are urgently required to support those in need with life’s most basic essentials.