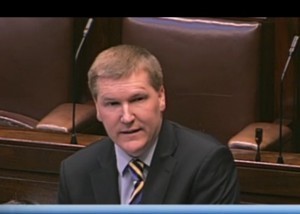 Fianna Fáil Finance spokesperson Michael McGrath (based in Carrigaline, Co Cork) has said a long term strategic approach is needed in how the State uses the unexpectedly strong corporation tax receipts received to date in 2015 including the establishment of a “rainy day” fund in the coming years to cushion the effects of any future shock in the economy.

According to media reports, Exchequer figures to be published later today will show the state took in close to €3 billion more in taxes in the first eleven months of the year than the government expected. It is likely that, in line with trend so far this year, more than €2 billion of the extra revenue comes from corporation tax receipts. This increase in corporation tax receipts is more than forty times greater than the government expected. Historically, this has proved to be one of the most volatile tax headings as it is largely influenced by external factors.

Deputy McGrath commented: “Fianna Fáil welcomes the expected strong exchequer figures for the eleven months to the end of November, with the trend of buoyant corporation tax receipts again to the fore.

“As a country, we need to remember that we have a very large debt level and this must to be reduced over time to provide a cushion for inevitable future economic shocks. To date the government’s main focus has been on using as much of the money as possible on supplementary estimates and unfocused spending commitments. Their record in four key domestic issues: housing, healthcare, mortgages and water, has been abysmal. They are unable to point to a single concrete achievement in these areas, despite spending being massively ramped up.

“Fianna Fáil will bring forward proposals in our manifesto for the establishment of a rainy day fund. Between 2001 and 2009 over €12 billion was put in to the National Pension Reserve Fund by means of a contribution of 1% of GDP annually. If this fund had not been put in place, the level of national debt would have had to be increased even further in response to the economic and banking crisis.

“A more appropriate model now would be one which involves a larger contribution when surplus tax revenues are being generated and should be copper fastened with clear rules as to when and for what purpose the funds can be used. Now is the time to start planning for any unexpected shocks in the future. We have over €2 billion in extra corporation tax receipts this year; there is an obligation on the State to deploy this in the best long term interests of citizens.”