Film In Cork (which replaced the Cork Screen Commission), a joint initiative of Cork City & County Councils, works to promote all aspects of production in the Cork region. As part of this creative initiative, Film in Cork will be running a training scheme called the “Production Club” in RTÉ Cork’s studio on Father Matthew Street. The Production Club begins on Thursday 21st January, with local and national industry experts offering advice and insight to the participants attending. Sessions will be held on the third Thursday of every month, between 7 pm and 9 pm, from January to June. 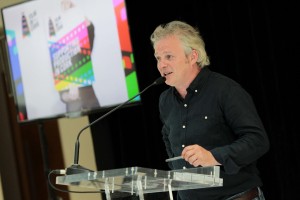 Film in Cork is a new initiative supported by Cork City Council & Cork County Council Art Offices to promote all aspects of production in Cork. It will provide production, location and training services to those working in film, television, and animation. For more information see www.filmincork.com.
Pic: Diane Cusack

The Production Club will be hugely beneficial for the participants involved given the quality of access offered by the initiative, with speakers such as Paul Duane, producer of 2014 RTE hit drama “Amber” and Cork producer Conor Barry, whose latest feature “Mammal” will have its world premiere in competition at Sundance next month, having just been confirmed. RTÉ Cork’s studio is an invaluable resource to Cork’s production community – with constant production throughout the year, including series such as “The Today Show”, “Nationwide” and recent hit “Creedon’s Wild Atlantic Way”.

Heavily subsidized by Cork’s local authorities, the Production Club offers a real and affordable opportunity for the development of the production community in Cork, in a relevant, central location.

Rossa Mullin of Film In Cork stated: “We are delighted to be able to launch this new training initiative aimed at writers, directors and producers in the Cork region. The calibre of speaker attending on a monthly basis bodes well for the future development of production in Cork. We are particularly grateful to RTE Cork for so generously offering us a home for these monthly sessions. It is important, particularly for emerging talent, to see that this is an industry where focused hard work goes on week in, week out, all year around. We hope that this scheme will assist these talented folk to take the next step in their careers and enable the Cork region to blossom in terms of projects across film, television and animation.”

Anticipating heavy demand from Cork’s large pool of talented writers, directors and producers, Film in Cork recommends that those interested in the Production Club apply early as places are limited. To apply, register with Film in Cork by emailing Laura at laura@filmincork.com by 11th January 2016.