INFOGRAPH: How old is too old to try for a baby? 79% of Irish people don’t know – according to Cork based ‘My Fertility Check’

The national report was commissioned by My Fertility Check – a self-referral fertility assessment service for men, women and couples. It revealed that the majority of adults in Ireland are misinformed about the age at which fertility declines. Worryingly, 79% of people are unaware that fertility begins to decline at 30 years, prompting calls for a national, State-funded education campaign on fertility.

Commenting on the results, Head of Clinical Services at My Fertility Check, Mary McAuliffe, said “I see so many women and couples attending for fertility treatment and IVF who are surprised that it has proven so difficult to have a baby naturally. A substantial portion of adults think fertility declines at a much later age than it does in reality. 41% of people think the decline begins at 35 while one third believe it starts later – at 40 years. The proportion of people that are misinformed is of concern.”

She continued “The results really highlight the need for a nation-wide, State-funded education campaign on fertility and reproductive health, particularly targeting students at third level. Young people need to be educated on the lifestyle choices that can affect their fertility; in particular, age, smoking, alcohol and health issues such as sexually transmitted diseases.”

A staggering 86% of respondents said they had never had a fertility assessment. Six out of ten of these said it was because they were unaware of the existence of fertility check services. “Having a fertility check at an earlier age will empower people with the knowledge they need to make informed decisions about their future plans for starting a family and, will also help them avoid the emotional and high costs associated with fertility treatment” said Ms McAuliffe.

“From fertility-awareness studies and population surveys, we have learned that most young people are too optimistic about their chances to conceive spontaneously after age 35. Also, young people tend to overestimate the effectiveness of IVF, in part due to the number of celebrities giving birth in their forties and, also due to ‘miracle’ stories in the media” she continued.

Respondents were also asked for their opinion on why people in Ireland are leaving it later in life to start a family. (A recent Eurostat survey showed that first time mothers in Ireland are among the oldest in Europe, with 52% aged between 30 and 39.)

46% of women said that waiting for the right partner was their main reason for delaying having a baby. There was a marked difference in opinion on this, with just 29% of men agreeing. More than one third of men (37%) cited financial concerns as their main reason to put off fatherhood. 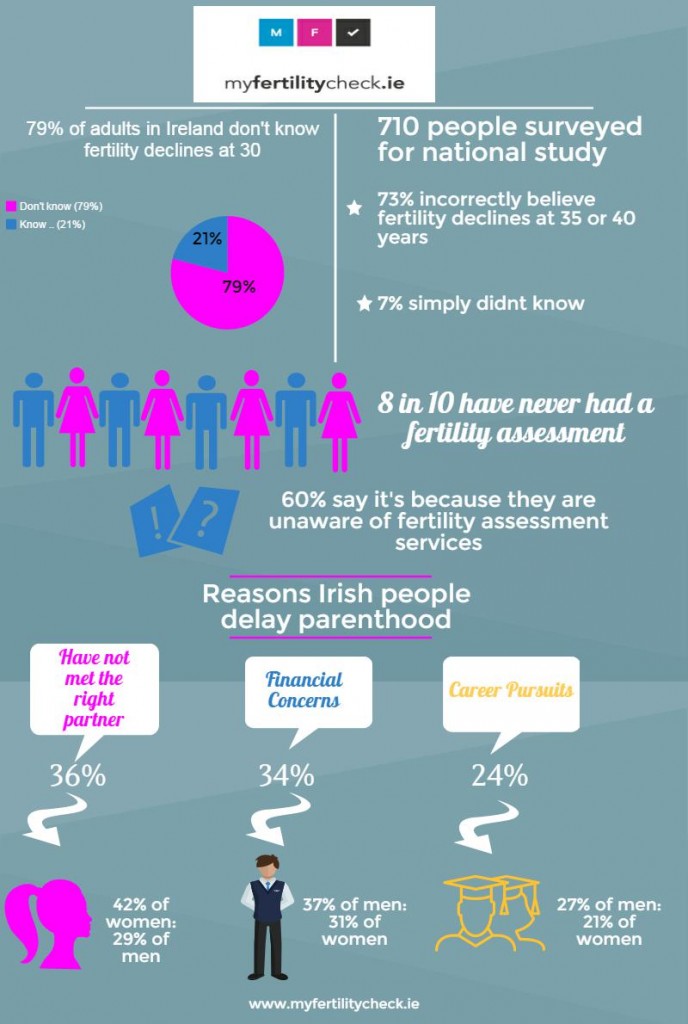