The Irish Examiner Cork City Marathon has announced Cork’s Red FM as the official media partner for 2016 marathon. To coincide with the announcement Red FM have officially launched their new charity initiative #RUNWITHRED which will help to raise vital funds for their chosen charity partners. 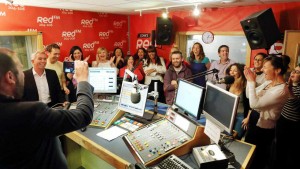 “Red FM are delighted to be involved in this prestigious Cork event. We want to make the 10th anniversary of the Cork City Marathon the biggest and best one yet – but we need your help! We have officially launched our new charity initiative #RUNWITHRED,” said Colm Moore, Presenter on Cork’s Red FM, producer of The Neil Prendeville Show and avid marathon runner.

“All the Red FM presenters will be running – alongside hundreds of Red FM listeners to help raise vital funds for some amazing Cork charities. We want to get lots of people involved – but you don’t have to be super fit! We will be on hand with training advice and motivation to get you there! We have lots of other tweaks and ideas for the day itself that we feel will make the 2016 marathon definitely one to remember,”

“We are looking for relay teams consisting of 5 people – call on friends, family, colleagues, workmates, college buddies, team mates, the locals in your pub, the girls at bingo – whoever! But if you are super fit and planning on running the full or half marathon and want to get involved – you can!” added Colm.

“And remember, all the money raised by #RUNWITHRED stays in Cork!” he added.

Red FM will broadcast live on Bank Holiday Monday, June 6th 2016 from the start / finish line on Patrick Street from 8am.Visit www.redfm.ie/runwithred – for all the details and sign up! Get fit – Have fun – Make a Difference!!

Why is a Cork City Councillor unhappy with Tesco?
Previous Post
An Post retaining Social Welfare Contract is good news for small towns in Cork