Carmel Nic Airt, the Príomhoide of Gaelscoil Mhichíl Uí Choileáin, currently on leave, heads to the Greek island of Leros tomorrow where she will spend a month assisting with the refugee crisis. Hundreds from Syria and other conflict zones in the region make the perilous journey daily coming across on dingies from Turkey, hoping for a better life in Europe. The inflatable crafts sink regularly which sees men, women and children drowned and washed up on beaches. The issue is at crisis point for several months. 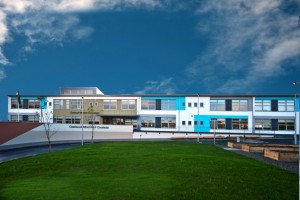 Carmel was moved by footage she saw of refugees and the horrendous conditions in which they risk their lives by boat to reach Greece from Turkey. She also met Syrian refugee children in Marburg, Germany back in November, when she visited a school twinned with the Clonakilty Gaelscoil. Around 200 had enrolled in the school since last September.

This prompted her to make the decision go herself to help out on the island of Leros.

The “Island to Island” intensive fundraising campaign was launched and has been a great success over the last 4-5 weeks.
Carmel has expressed her thanks to all who have organised and supported the many fundraisers around Clonakilty and the wider West Cork area.
Included were skipathons in schools, table quizzes, cake sales, music concerts, coffee days, a “Taste off Syria” night, and many others events. Every cent raised in the Clonakilty and wider West Cork area will be spent on setting up a kitchen and related facilities and also for basic food and necessary items for the refugees who arrive soaked wet from their journey.
Carmel emphasises that she is paying all her own costs to get to Leros and also while she will be there.

She will spend a month on the island working voluntarily assisting refugees as they arrive and afterwards.

The ‘Island To Island’ Facebook page set up for the fundraising campaign will continue to post updates from Carmel.