Tourism Ireland’s 2016 series of ‘Jump into Ireland’ sales blitzes across the United States kicked off this week – taking in the key cities of Chicago, Boston and New York.

A delegation of 20 tourism companies from Ireland and the United States – including Fota House, Arboretum and Gardens – will meet with more than 200 top-producing travel agents, as well as about 80 influential travel and lifestyle journalists.

Alison Metcalfe, Tourism Ireland’s Head of North America, said: “2015 was the third record-breaking year in a row for visitor numbers to Ireland from North America. Tourism Ireland is undertaking an extensive programme of promotional activity again this year – to keep the momentum going and build on that growth. Our ambition for 2016 is to grow visitor numbers from the United States by a further +7% and we look forward to working closely with our valuable industry partners, in both the US and Ireland, to achieve that target. Our ‘Jump into Ireland’ sales blitz this week provides an excellent platform to kickstart our 2016 promotional programme and to spread the word about the many great things to see and do right around the island of Ireland.”

Key messages include the Wild Atlantic Way and Ireland’s Ancient East. Similar ‘Jump into Ireland’ events will take place in Phoenix (Arizona), in May; Sarasota (Florida), in August; and in San Francisco, Los Angeles (California) and Seattle (Washington), in November. 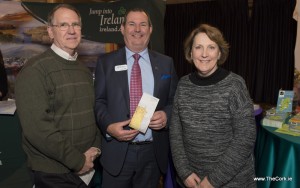