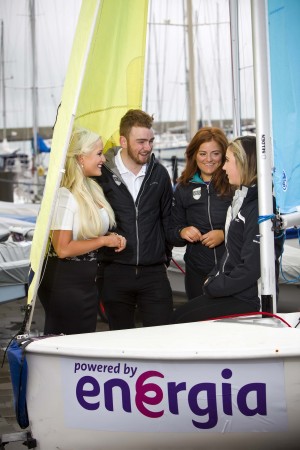 The annual UCD Vs TCD Colours Championship was held in Dun Laoghaire on Saturday 2nd April. In a closely run contest the UCD sailing team were this year’s winners. UCD also won the Ladies competition, the alumni competition and the Gold Fleet. UCD have won every national university sailing event so far this year

Robbie Hynes, UCD Sailing Club commented, “Energia have been supporting us for almost three years now and we really appreciate it. Whether it’s competing in Irish competitions like today’s Colours Championship or international ones like the Student Yachting World Cup, their support is a great help.

“UCD have won every national university sailing event so far this year, with the final event – the Student Yachting Nationals, this coming Friday so here’s hoping! ”

Michelle Kells, Key Account Manager at Energia said, “Energia is delighted to be powering the efforts of UCD Sailing Team. As a leading provider of renewable energy on the island of Ireland, we know all about harnessing the power of wind.”