The Macra na Feirme Seandun region AGM was held on Wednesday the 8th of June in the Carrigaline Court Hotel.

As well as the election of the new officers for the Seandun region 2016-2017, various awards were presented on the night. After what was a hugely successful year for Carrigaline Macra, where they both won a National Title in Impromptu Debating and reached the final 14 nationally in Club of the Year 2015, they were awarded the accolade of Seandun Club of the Year for the first time in a number of years.

Cork City Macra won the award of Most Improved Club after attaining a number of significant milestones in what was only their second year in existence.

The titles of Seandun PRO of the Year and PRO Book of the Year were both awarded to Donal O’Sullivan from Whitechurch Macra. Donal was awarded the title after a year in which he worked tirelessly to promote Whitechurch Macra in the media in what was the club’s 60th year in existence where he also compiled the booklet for their anniversary dinner dance held last October. 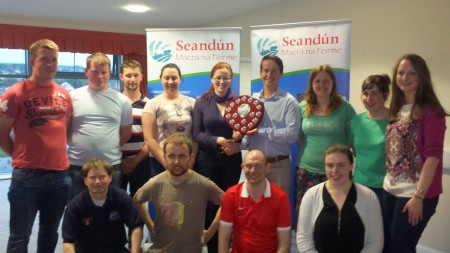 Carrigaline Macra were named Club of the Year. Their victories included winning the 2016 Impromptu Debating competition.