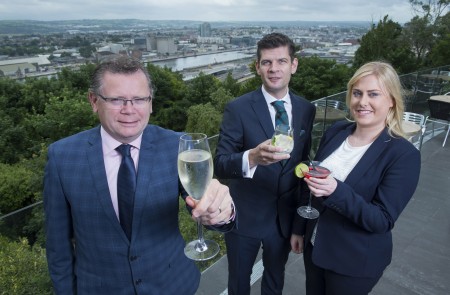 Originally home to a merchant prince of Cork, the Montenotte Hotel has been completely refurbished to assume its rightful place as a leading boutique hotel in the heart of Cork city.

The vision of hotel developer, Frankie Whelehan, to transform Cork’s third largest hotel into a superior 4 star, luxury destination for national and international visitors has been realized following an investment of €5 million and significant redevelopment. The addition of a magnificent 6 metre outdoor covered terrace provides one of the best views of Cork city and a perfect setting for the hotel’s new bar and restaurant, aptly named “Panorama”. Other unique features of the hotel include a private cinema, CAMEO, which will cater for corporate groups as well as select events at the hotel, along with enhanced new conferencing facilities.

Speaking at the completion of works today (Thursday) in Cork, Frankie Whelehan was delighted to announce the appointment of Anne Downey as the new General Manager, who joins the Montenotte Hotel from the Connemara Coast Hotel, one of Ireland’s leading hotels which has won several accolades and international awards under Downey’s management. Investing in the team as well as the hotel facilities, Mr. Whelehan has also appointed Helena O’Brien to the role of Sales and Marketing Manager and Donald Morrissey to the role of Resident Manager, among a number of other senior hotel appointments.

“We are delighted that the work to transform the Montenotte Hotel have been successfully completed; it was really important to us to embrace the heritage of Montenotte while creating a luxury boutique offering in the city that provides the very best in dining, conferencing, fitness, entertainment and accommodation,” said Frankie Whelehan.

Bookings at the Montenotte Hotel are already proving the hotelier’s investment a sound choice, with occupancy rates for the summer season already exceeding projections.

Set on six acres with ample parking, The Montenotte Hotel will undoubtedly prove a popular location for corporate events. The new conference area, complete with private cinema, high speed broadband, meeting rooms and a number of dining options will provide both indigenous and multinational clients with some of the best facilities in the region also.