The annual Macra na Feirme county officer training took place last weekend in Limerick where members from the different regional and county executives throughout the country were in attendance. County officer training focuses primarily on officer skills and strategic planning and provides officers with the skills required for county officer positions such as Chair, Secretary, Treasurer, PRO, Competitions, Development, Young Farmer, Sports and Social, and Travel.

A large continent from Seandun represented the region where they were given training for their respective roles in the region for the up-coming macra year. Training on Saturday was then followed with a dinner dance later that night where the Macra na Feirme leadership awards were presented. The Leadership Distinction awards are presented each year to officers who have excelled at their role in their respective region or county and are presented in recognition of their previous year’s work. 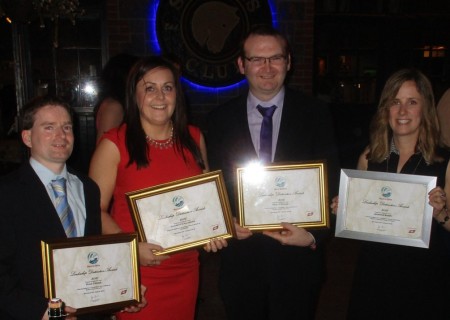 A huge congratulations to the Seandun club members who were awarded the following distinctions in recognition of their hard work for Seandun in the Macra Year 2015-2016: Eilish O’ Callaghan from Knockraha Macra (Gold award), Paul O’Regan from Kinsale Macra (Gold award), Ollie Cronin from Carrigaline Macra (Gold award) and Jennifer Barry from Glanmire Macra (Silver award).

Congratulations to all involved and best of luck to all Seandun officers in their respective roles over the next 12 months.