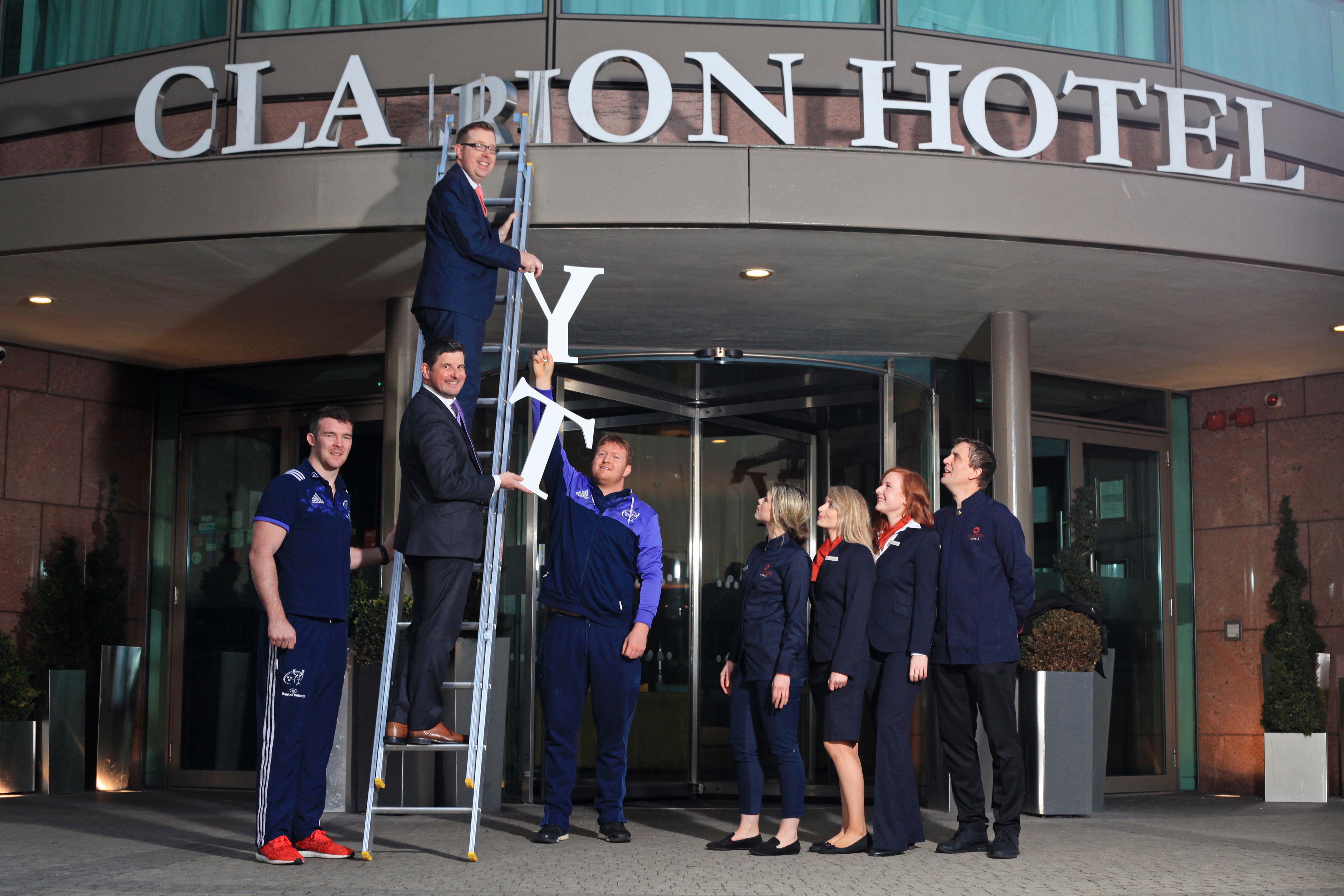 Raymond Kelleher, Sales & Marketing Manager and Conor O’Toole, General Manager of the Clayton Hotel Cork City get a helping hand from Munster Rugby’s Peter O’Mahony and Stephen Archer with the officially rebranding to the Clayton Hotel Cork City as Clayton staff members look on. A €2million investment at the popular 4 star city centre hotel in Cork was also announced as part of the rebrand.

Following the acquisition of the Clarion Hotel Cork City by Dalata Hotel Group PLC early this year, the official rebrand to Clayton Hotel Cork City was announced today as well as a €2 million investment at the 4 star hotel.

Located on Lapps Quay in the heart of the city, the popular and award winning hotel will benefit from a multi-million euro investment, which will include rooms refurbishment, a new restaurant, Clayton Hotels’ signature Red Bean Roaster Café in the Atrium and improved conferencing amongst other redevelopment. The hotel’s swimming pool, steam and gym have already been upgraded for the newly rebranded Club Vitae leisure club. While room renovations are already underway, works on the ground floor will begin in January 2017.
Commenting on today’s announcement, General Manager of the new Clayton Hotel Cork City, Conor O’Toole said, “Becoming a Clayton Hotel means that the hotel will not only benefit from significant investment, but we will become part of the largest hotel network in Ireland through the Dalata Hotel Group PLC. We see the move to the Clayton brand as a very positive development in this hotel’s successful story to date and a progressive and timely step into the New Year.”

With room occupancy rates well in excess of the national average, the 198-bedroom Clayton Hotel Cork City will cater for the indigenous business community, tech and pharma multinationals in the region as well as corporate travellers and tourists to Cork city and county.

Employing more than 168 people, all staff were retained in the transition from Clarion to Clayton Hotel Cork City and it is expected that there will be additional job creation in 2017.

“It’s an exciting time for the team here, who will remain focused on the customer experience, great service and continuing the reputation of this hotel as a market leader not only in Cork, but in Ireland,” added Conor O’Toole.