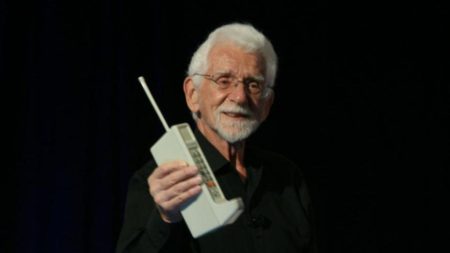 File photo of Marty Cooper (born 1928). He invented the first handheld cellular mobile phone (distinct from the car phone) in 1973 while working for Motorola

Cork is among the most careless of counties when it comes to looking after smartphones, a survey commissioned by Low.ie has revealed.

Confirming its status as the ‘rebel’ county, some 28% of respondents from Cork admitted to going the extra mile to save their smartphone after dropping it down the loo.

Similarly, 36% of Cork natives confessed they had left their smartphone behind in a taxi, plane or hotel, while another 20% of them have locked their phones and failed to remember their passcode.

The study of 500 smartphone users, which was conducted by Catalyst Market Research on behalf of Low.ie, also found that smartphones involve a significant investment for most of us, with 62.23% revealing their smartphones are worth €300 or more.

With the average gadget insurance policy costing approx. seven euro a month, this could amount to a sizable saving of anywhere between €84 in insurance payments and up to €800 for the cost of a new phone and outstanding phone plan.
Commenting on the results of the survey, Peter O’Reilly, Director, Low.ie, said: “We know how important life insurance is to individuals and families and whilst not in the same category – you are in big trouble when you lose or damage or have your phone stolen as they are invaluable for both work and everyday living. It came as a great surprise to us that so few appear to have these crucial gadgets insured.

Low.ie is an online broker for mortgage protection and life insurance with over €1billion in cover written and over 5,000 customers since their launch just over 3 years ago.