Pat O’Connell is elected for a second term as President of the Cork Business Association, while Philip Gillivan is elected as Vice President for 2017

The event marked the re-election of CBA President, Pat O Connell for the second year of his two year term as well as the election of Philip Gillivan owner of the Shelbourne Bar MacCurtain Street as Vice President for 2017. The AGM also saw the current Executive Committee re-elected for 2017, and Cuddy O’Leary & Foley elected as Auditors for 2017.

Commenting on his appointment President Pat O Connell said “I am thrilled to have been elected as President of this distinguished association for a second term. It is an honour of which I am very proud indeed. There is little which offers as much pride as serving your city and being recognised by one’s peers. The challenges at this stage of Corks development are enormous as are the opportunities, but with the present CBA team and a committed Executive Committee I believe we can deliver”. 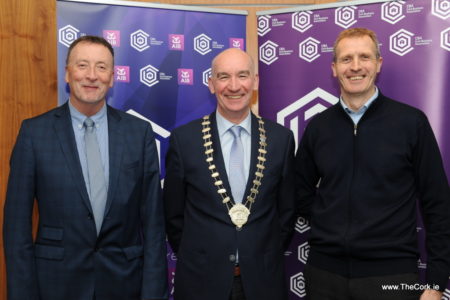 Pat O’Connell, President of the CBA with Philip Gillivan, Vice-President and Lawrence Owens, CEO at the AGM. Photo Billy macGill

Commenting on the appointment, Lawrence Owens, CEO of Cork Business Association, said “I would like to congratulate Pat O’Connell on his re-election as our President for 2017 and I look forward to continuing the positive work we started in 2016. Pat as we know is a great ambassador for Cork he is well known and well liked however he will not shirk tackling the issues of the day. Over the past year he has put a huge amount of his time into resolving challenges as they arise and consistently works to promote our city in every way. That he has agreed to remain as president for a second term and continue with this workload as well as running a demanding business is a testament to his commitment and passion for our city”.
“I also would also like to congratulate Philip Gillivan on his election as Vice President for 2017. Philip is an entrepreneur with a strong commercial background and I am confident he will bring new progressive and dynamic thinking to the organisation.”

The Cork Business Association is a not for profit organisation that represents the interests of businesses in Cork. We are the voice of businesses in Cork and we are dedicated to promoting their interests at local and national level and Cork City as the premier commercial and tourist destination in the southern region of Ireland.