Second award this year for firm, after best workplace accolade

Collins McNicholas, the national Recruitment & HR Services Group, has been named as one of Ireland’s best managed companies in the Deloitte Best Managed Companies Awards Programme.

This is the company’s fourth time to be named one of Ireland’s top companies for demonstrating superior business performance. The award comes two weeks after the company was named as one of the Best Workplaces in Ireland in 2017.

“We are delighted to win this award for the fourth year in a row. It is a testament to the hard work and dedication of our team, and the exceptional level of service they deliver, that has helped us to grow this business over the last 27 years,” said Niall Murray, Managing Director of Collins McNicholas. 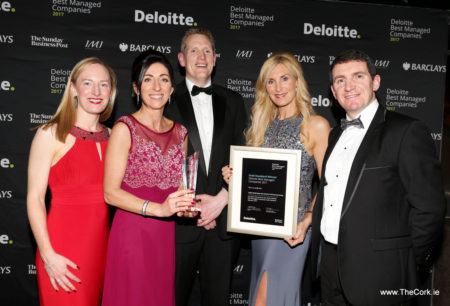 “We pride ourselves on the long-standing relationships we build with our customers and we would like to extend our thanks to all our customers for their loyalty over the years. Congratulations to all of this year’s winners.”

The company was recently recognised at an awards gala dinner in Dublin’s Convention Centre which was attended by over 900 people from the Irish business community.

The Deloitte Best Managed Companies awards programme, in association with Barclays Bank Ireland, promotes and recognises excellence in Irish-owned and managed companies. Now in its ninth year, it is the only awards scheme in the country that considers a company’s performance from every perspective.

“Congratulations to all the 2017 winners. All the companies are at the end of a long process of evaluation, which makes their Best Managed designation even more rewarding and valuable as a marketing tool for their business. It is clear that these companies make an invaluable contribution to the Irish economy —employing 60,000 people and generating turnover of €11bn.”

“We believe that great people make the best companies. Behind this year’s winning companies are 60,000 people who combined have demonstrated absolute commitment to business excellence. The Barclays team is delighted to have had the opportunity to support this diverse range of inspiring companies in the development of their unique strategies and we wish them continued success in the future.”