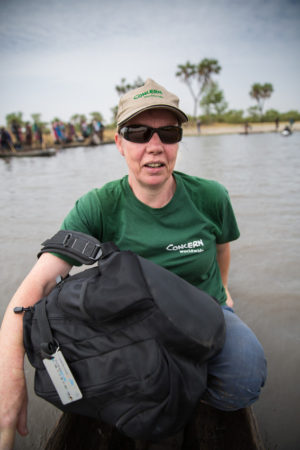 Concern Emergency Director for Concern Worldwide in South Sudan, travelling through the swamps of Leer County in Unity State by dugout canoe.

An Irish aid worker has revealed how petrified civilians are hiding in snake-infested swamps to avoid getting killed by militia in war-ravaged South Sudan.

Nellie Kingston, who works with Concern Worldwide, has been responding to the crisis in the East African nation ever since famine was declared by the UN last month.

The Emergency Response Coordinator from Clonakilty, Co. Cork admits the work has been ‘very challenging’ and has witnessed terrible suffering due to the civil war that has claimed thousands of lives, many of them women and children, since the nation declared independence in 2011.

Speaking from the capital Juba she said: “We have just returned from Leer County. I walked through deserted villages where, people had fled from the fighting and sought refuge in nearby swamps. These are the most vulnerable, those who cannot make the journey to the camps set up by the United Nations. Those left behind are hiding in swamps with nothing to eat.”

Nellie and her team follow the communities into the swamps by canoe and then wade through the murky waters on foot carrying vital nutrition supplies.

“I spoke to one woman who hid in the swamps during 10 days of fighting. She hid for a further 10 days to avoid getting killed. The stories we’ve been hearing are horrifying. The only saving grace in the swamps is that the people have access to fish, which adds some protein to their diet,” she added.

The swamps are known as The Sudd, a vast expanse of lowland region in Central South Sudan. Formed by the river White Nile, the area covers 30,000 square kilometers and is one of the world’s largest wetlands in the Nile basin.

“There are poisonous snakes everywhere such as cobras,” Nellie revealed.

“Deadly snakes live in The Sudd so it’s extremely dangerous, especially for little children as there are no medical facilities available if they get bitten. We also have to watch our step when we are in the swamps in case we disturb them or other creatures living in the wetlands,” she told the Star.

Aid workers make the precarious journey into the swamps to support nutrition treatment for the mothers and children seeking shelter in the uninhabitable terrain.

“Access is very difficult. It’s very hard for aid agencies to deliver food rations to people hiding in remote swamps. And when the rains hit later this month, most of the dirt roads will turn to rivers of mud, making the delivery of aid across much of Leer County nearly impossible. The people are more or less trapped where they are. It’s particularly challenging for our South Sudanese colleagues, who are working night and day to help their own people,” she said.

Mothers, babies and children living in the wetlands are aid agencies biggest worry.

Concern is supporting them by providing nutritional assistance such as outpatient treatment, supplementary feeding programmes for malnourished children; and treatment for pregnant women and lactating mothers.

That, coupled with the food drops provided by the World Food Programme, are the main source of support for communities in the area but Nellie said it’s never enough.

“Resources are scarce. In the short-term, the money just isn’t being made available. The South Sudan humanitarian response is underfunded and unless, there can be peace sought to end the conflict, more people will die,” she said.

Concern has launched an East Africa Crisis Appeal for €25 million to help support 1.8 million people urgently in need of food assistance due to drought and conflict across Kenya, Ethiopia, Somalia and South Sudan, where 4.9 million people – 40 per cent of the population – urgently need food and nutrition assistance while 100,000 people face starvation.

A 7.00pm curfew is also imposed on everyone living in the country, so Nellie admits there are times when she feels unsafe.

“You can feel unsafe but it’s the nature of the job and you just keep going. Life will be like this for the people of South Sudan for a long time to come,” she said.

Nellie, who started working with Concern following the Indian Ocean Earthquake in 2004 and who was acting Country Director in Haiti when the earthquake struck last year, described the famine as a “manmade” food crisis. Fighters from both the government and the rebel side are accused of robbing, raping and killing civilians. Gunmen have torched crops and chased farmers from their fields.

“You keep thinking of the grandparents, who are looking after orphaned grandchildren, many of whom have watched their parents killed in front of them. Little children here only know war. They play football and war games. They make guns out of sticks and they pretend to fight each other. Their grandparents fear they’ll grow up to be child soldiers as they know nothing but violence,” she said.

“All these people want is to live peacefully so they can plant their seeds in their fields and harvest their food. They long for their children to be educated and for a simple life with basic human rights. Above all, they want an end to a war they did not start.”