Deirdre Clune MEP for Ireland South (Fine Gael), hosted a visit of 16 students from 4 Cork schools to the European Parliament in Brussels earlier this week. The students were accompanied by their teachers and by Councillor Des Cahill (Fine Gael), Lord Mayor of Cork City.

The students represented Colaiste an Spioraid Naoimh, Bishoptown, Bishopstown Community College, Ashton School and Presentation Brothers College and had participated in a debate in City Hall in February on the advantages and disadvantages of Ireland being a member of the European Union. A total of 9 schools participated in the competition, with the top 4 securing places on the trip to Brussels.

Speaking as the group visited the European Parliament, MEP Clune said that she was delighted to welcome the group to the parliament. During their tour, MEP Clune explained the role of the EU and its institutions as well as her experience as an MEP to the students.

The group had an opportunity to visit the Parliament chamber, where many important debates and historic votes have taken place. The group also visited the Irish Permanent Representation to the European Union, and enjoyed a walking tour of Brussels. 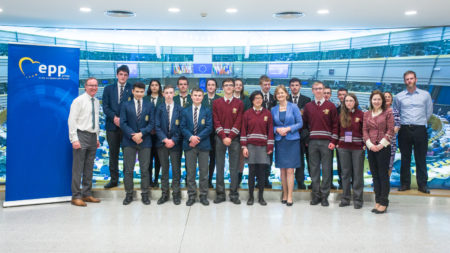