Cork City Council is honouring some of its finest community volunteers and groups at its annual Lord Mayor’s Civic and Community & Voluntary Awards Night in City Hall this Wednesday 31st May 2017 at 7.30 p.m.

The Lord Mayor’s Civic Awards will be presented to the following six recipients:

Pat Cotter, in recognition of his contribution to the cultural life of Cork through “A Summer’s Evening on the Quad”.

John Kennedy, in recognition of his commitment to the sporting and community life of Cork through his work with the FORAS Trust and Cork City FC, Ringmnahon Rangers, and Foroige.

Liam Maher, in recognition of his commitment to the community and charity life of Cork through his work with Cork Youth Orchestra, Sunday’s Well Rebels, the Rebel Plunge and St. Luke’s Male Voice Choir.

Gerrie O’Grady, in recognition of her commitment to supporting the deaf and hard of hearing communities in Cork through her role as manager of Cork Deaf Association.

Anne Quinlan, in recognition of her commitment to community life in Ballinlough through her work with Ballinlough Youth Clubs and Community Association.

Viv Sadd, in recognition of his commitment to community life in Mahon through his work as project co-ordinator of Mahon Community Development Project.

The Community & Voluntary Awards, presented by Cork City Council and sponsored by the Evening Echo are now in their thirteenth year and recognise the significant contribution of the community and voluntary sector to the people of Cork City.

The different categories represent the broad and diverse range of community work in the city.

The winners will be announced on the night from sixteen shortlisted groups in five categories:

An overall award will also be presented on the night.

Both awards will be streamed live at www.corkcity.ie/tv 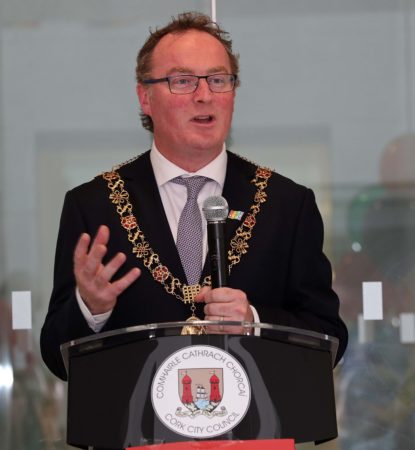 Speaking in relation to the awards ceremony, the Lord Mayor said:

“This awards night recognises individuals for their contribution to life in Cork. The six civic award nominees have shown great leadership and are role models worthy of their awards. Those nominated can all be described as selfless.

This awards night also marks the tremendous work carried out by the community and voluntary sector. This sector contributes significantly and positively to the life of the citizens of Cork.”