Demolition work is to begin today on the site of the former Munster Showgrounds paving  the way for Cork City Council to  develop  Marina Park.

Marina Park in Blackrock, at approx 32 ha, will be approximately five times the size of Fitzgerald’s Park. It will run around the redeveloped Páirc Ui Chaoimh and includes the popular Atlantic Pond amenity. The iconic city park, which designers describe as a “podium for outdoor activities”, is just  2.5 km east of Cork city centre. 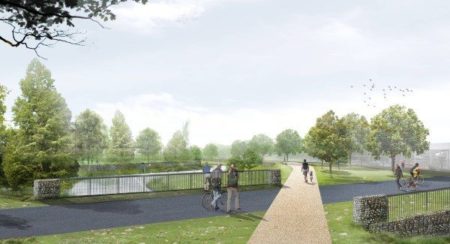 Marina Park extends from Monahan Road and Central Park Road to the west to the harbour at Blackrock to the east. Blackrock pier is currently being redeveloped and is due to be unveiled in June.

The Marina Park plans went through public consultation in 2014 and the detail design for Phase 1 is being finalised between now and the end of July.  Phase 1 (€7 million) will go out to tender in the second half of the year and construction work is due to begin in early 2018 with an expected opening date of December 2018/January 2019. The Master Plan and Part viii have been approved by Cork City Council. Additional phases to complete the entire development of the park will be put in place over a number of years as finance becomes available.

The Marina Park Masterplan was formulated by OKRA Landscape Consultants, one of Europe’s leading Landscape Architects in consultation with the Council’s Parks Division Personnel. The project is funded by EU, LIHAF and Cork City Council.