The RNLI is headquartered in the UK, and thus has a famous UK public figure as its president – HRH The Duke of Kent KG. The Duke has just finished two days of engagements to Irish lifeboat stations, which saw visits to Lough Derg, Kilrush and Fenit RNLI before finishing yesterday (Wednesday 31 May) with Kinsale and Crosshaven RNLI. Representatives from Union Hall, Courtmacsherry and Ballycotton lifeboat stations were also present and the tour ended with a trip out on the Ballycotton all-weather lifeboat, which had been launched on service the previous evening.

At the final stop in Crosshaven lifeboat station two of the rescuees who attended and met with HRH The Duke of Kent shared their very different experiences with the RNLI. They were keen to come back and share their stories for the visit. Laura O’Mahony from Sydney Park in Cork City was out walking her beloved dog Sam near Hop Island in Rochestown when he got into difficulty and she went in after him. Both Laura and Sam were in danger of being lost that day and were rescued by Crosshaven RNLI. 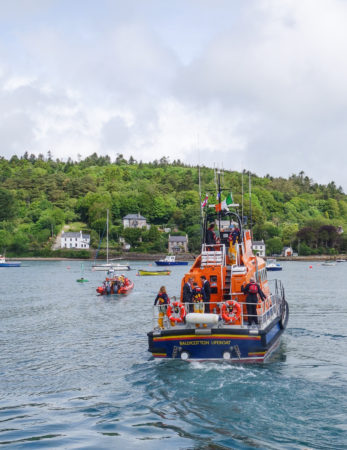 Speaking after the visit Laura said, ‘It was an honour to meet HRH The Duke of Kent and to talk about my involvement with the RNLI. I’ve been back to thank the station but I was delighted to talk again about my rescue. Sam is no longer with me but we had a few more years together and he was a very special dog. I brought his photo along today so he was here on the day. The RNLI saved two lives that day and I will always be very grateful.’

The other rescuee was Owen Corkery from Carrigaline. Owen had a very dramatic rescue which resulted in him losing his arm in 2012. Owen was thrown from his RIB near Haulbowline in Cork and lost his arm when the boat went over him several times causing serious injury also to his head and back. Owen was spotted by a member of the public and rescued by the Cork Pilot Boat and Crosshaven RNLI crews. Owen has been back to the station many times and shares his story with others to raise awareness.

Commenting during the visit Owen said, ‘Only for the lads on the Crosshaven lifeboat and the Cork Pilot Boat, I would not be here today. Everything fell into place in the minutes and hours after my accident and the crews undoubtedly saved my life. It’s a miracle I’m here today. Any one of my injuries should have taken me out.’

HRH The Duke of Kent went out on the Ballycotton All-Weather lifeboat which had travelled up especially from the station to bring the party including RNLI Chairman Stuart Popham, RNLI Chairman of the Irish Council David Delamer and the British Ambassador Robin Barnett out on a short trip and show them around the lifeboat.

Ballycotton RNLI was launched on Tuesday night at 10.25pm to reports of a flashing white light east of Ballycotton. Searching in calm conditions and with good visibility they found a small fishing vessel that had lost some fishing gear and had been circling for about 30 minutes trying to locate missing equipment.

RNLI Area Lifesaving Manager Fiona Murphy welcomed the visit of HRH The Duke of Kent to Ireland, ‘This was a very special visit for the stations involved. We were extremely grateful to have so many people present who had been rescued by our lifeboat crews. It was a huge honour for all the volunteer crews, station management and fundraisers to be visited by HRH The Duke of Kent in his role as President of the Institution. It is recognition of their role in the charity and all the work that is done by the dedicated teams behind the scenes.