German journalist Heinz Bück has been exploring Cork and the Wild Atlantic Way by campervan. He is accompanied by a small group of fellow campervan enthusiasts, who are here to soak up the spectacular scenery and the wealth of things to see and do around Ireland. His trip is supported by Tourism Ireland in Frankfurt and Fáilte Ireland.

Heinz Bück’s website (reportage.redactionsbureau.de) is extremely popular and he’ll be posting lots of great photos and details of his Ireland adventure online – inspiring his readers and followers to come and discover Cork and the Wild Atlantic Way for themselves. The group’s packed itinerary included visits to Blarney Castle and the Titanic Experience Cobh.

2016 was the best year ever for German visitor numbers to Ireland, with 650,000 German visitors contributing almost €400 million to the Irish economy. Tourism Ireland is undertaking an extensive programme of promotional activity once again throughout 2017, to build on that success.

Zoë Redmond, Tourism Ireland’s manager for Central Europe, said: “Tourism Ireland was delighted to support Heinz and his group on their journey along the Wild Atlantic Way. It’s a really effective way of engaging with his German followers, sparking their curiosity about Ireland. The group has been really impressed by our spectacular scenery, the range of things to see and do, as well as by the friendliness of the people they met. I am confident that Heinz’s visit will result in lots of positive publicity for Cork and the Wild Atlantic Way.” 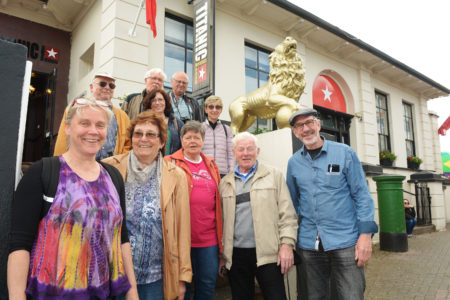