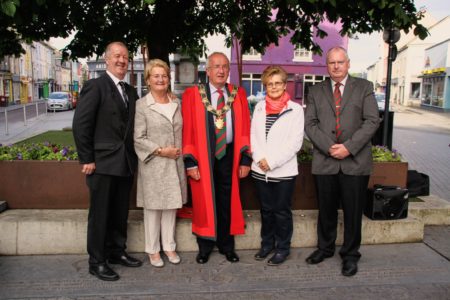 Gretta O’ Donovan, incoming Deputy Mayor acted as MC, and welcomed everyone and handed over to Anthony McDermott, dressed in the Mayoral Robe and the Chain of Office. Anthony thanked his family and everyone for their support during his busy year.

He then invited incoming Mayor John Loughnan to come forward and he presented him with the robe and chain, signalling the start of John’s year as Clonakilty Mayor.

John paid tribute to his predecessor and the great spirit in Clonakilty, promising to do his best in the year ahead. He pointed out that Clonakilty is the only town in Ireland to now have a town mayor – albeit non-statutory and totally an honorary position, since the abolition of the town council statutory Mayoral position in 2014. At the end of his speech, Gretta O’ Donovan presented the new Mayor with a specially commissioned bag to hold the Mayoral Chain when not being worn. Organised by Tomás Tuipéar, it was made in a totally voluntary capacity by Tracey Henderson and embroidered with the Clonakilty crest by John Allman of Brand-It. The Mayor thanked all who organised and attended the event and invited them for light refreshments to O’ Donovan’s Hotel. The formalities ended with Ger O’Driscoll of Clonakilty Brass Band playing “Amhrán na bhFiann”.