By TheCork.ie on 27th June, 2017Comments Off on RE-ROUTE THE WILD ATLANTIC WAY?: Cork MEP will lobby new Tourism Minister to have ‘Seven Heads’ region included

Share on Facebook Follow on Facebook Add to Google+ Connect on Linked in Subscribe by Email Print This Post
27 June 2017
By Bryan Smyth
bryan@TheCork.ie
Related link: AUDIO FEATURE: TheCork.ie travelled all of the Cork section of the Wild Atlantic Way, listen here
Ireland South MEP and member of the EU Tourism Taskforce Deirdre Clune has met with and is supporting campaigners in Cork whose are lobbying to include the Seven Heads Peninsula on the Wild Atlantic Way sign posted route. MEP Clune has already written to the Head of the Wild Atlantic Way, Fiona Monaghan, asking her to meet with tourism interests and stakeholders in the area. MEP Clune met with the campaigners on Friday last in Courtmacsherry and has promised to raise the issue with newly appointed Minister with responsibilities for Tourism Brendan Griffin.

“I think it would be a positive step if we could get a meeting arranged between local stakeholders and Fiona Monaghan. I am today raising this issue with Minister Brendan Griffin. Local residents of the Seven Heads area expressed their frustration and disappointment to me last Friday at the fact that the peninsula is not directly included on the signed Wild Atlantic Way Route. They feel it is impacting on the local economy. 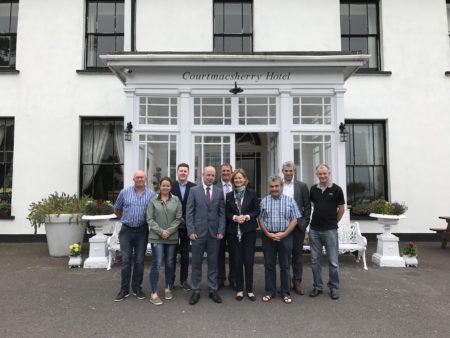 “The Wild Atlantic Way has been a tremendous success drawing visitors from around the world and can bring much needed revenue and tourism revenue to towns and villages along the route.

“Residents, tourism providers and stakeholders on the Seven Heads Peninsula feel that they have effectively been bypassed and that this is having a direct economic and social impact on the area. The peninsula has a rich beautiful and scenic landscape with a fascinating maritime history. With a little bit of engagement here, I think we can come to an amicable solution