TOURISM: Lighthearted survey for Travel Agency finds that Graham Norton would be ideal travel companion for most 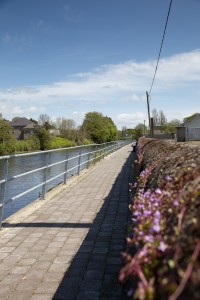 There is a “Graham Norton walkwalk” in Bandon next to the river. The West Cork town celebrates being the childhood home of the now famous BBC presenter.

TV presenter, Graham Norton has emerged as the top Irish celebrity people would pick to holiday with, according to the latest national Red C survey conducted on behalf of leading independent travel specialists, Travel Counsellors.

The funnyman – who spent much of his childhood in Bandon, West Cork – was a bigger hit for Irish women, with almost 50% picking him as their ideal travel companion, compared to one in three men.

Kim Kardashian has unsurprisingly proved more popular with men than women as a holiday companion, with just 4% of women picking the American reality star compared with 18% of males. Chart-topping singer Adele was chosen by 27% while one in five picked Hollywood actor Michael Fassbender.

Tea is also proving popular with Irish holidaymakers, who pack their teabags along with their sun cream. Overall one in ten people surveyed said they couldn’t live without tea while on holiday.

General manager at Travel Counsellors Ireland, Cathy Burke said: “A sense of fun is definitely on Irish holidaymakers’ travel check lists, and Graham Norton would make an ideal holiday companion. He’d no doubt have many enormously entertaining anecdotes to keep you laughing throughout your break.”

The nationally representative survey of over 1,000 adults also found one in three could not live without their smartphone on holidays. The same number, 31%, placed a similar value in sun lotion followed by books at 15%. While 40% of singles could not be parted from their phones on their travels, just 25% of those married admitted the same.

“If you are going on holiday, whether it’s a luxurious cruise, a sunshine escape in Mauritius or an incredible wildlife safari in South Africa, it’s a time to switch off,” said Cathy Burke.

“So, it’s interesting to see just how invaluable smartphones are in people’s lives. At Travel Counsellors, we place a huge emphasis on developing our global technology, used to enhance the personal and exceptional service our Travel Counsellors provide to all their customers.

“By doing this, it means that our customers can spend less time on their smartphones researching their holiday hotspot and more time enjoying it, as all the work has been done for them.”

Travel Counsellors is an independent travel company whose global network of 1,600 travel professionals deliver bespoke travel experiences to both the leisure and corporate markets. There are 70 Travel Counsellors operating throughout Ireland, offering unparalleled industry expertise and first-hand destination knowledge coupled with a work ethic which revolves around genuine care for the customer. For more information see http://www.travelcounsellors.ie/