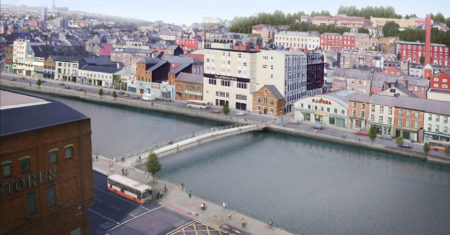 Artists impression of how the new pedestrian bridge will look

Cork City Council is asking the people of Cork for their views on Cork’s newest bridge, the €3.5 million pedestrian and cycle bridge opposite Harley Street.

“The construction of the bridge aims to provide improved pedestrian access and make the city more cycle-friendly with particular benefits for travel between Kent Station & McCurtain Street on the northern side of the channel and Parnell Place, the city centre & the bus station on the southern side,” he said.

“It fits sympathetically into the surrounding quays, buildings and urban realm and will provide a convenient and accessible link across the river with minimal visual intrusion on the river vista or river channel”.

The Metropole Hotel, which is due to undergo a €50 million refurbishment including the development of a new adjoining hotel, backs on to St Patrick’s Quay.

Cork City Council and the National Transport Authority (NTA) have already spent in excess of €5 million on the Kent Station to city centre improvement project and the bridge will add another dimension to public realm improvements in the area.

Full details of the proposed bridge will be available for inspection for the next six weeks at City Hall from 9- 4pm Monday to Friday until Tuesday August 22 . Information is also available on consult.corkcity.ie under ‘browse section’.

Subject to planning approval,- detailed design will take place in the coming months with construction scheduled to commence in early 2018.