All funds raised will go towards initiatives such as the refurbishment of the family room in the Emergency Department, as well as purchasing vital medical equipment for the Urology Unit in CUH Cancer Services at Cork University Hospital.

To date, over €90,000 has been raised from CUH Charity Gala Ball events, which has directly benefited cancer patients, the Children’s Unit and patients in the Neurology Unit at the hospital. It is hoped that bladder cancer patients and emergency services patients and their families will all benefit as a result of the funds raised from this year’s event. 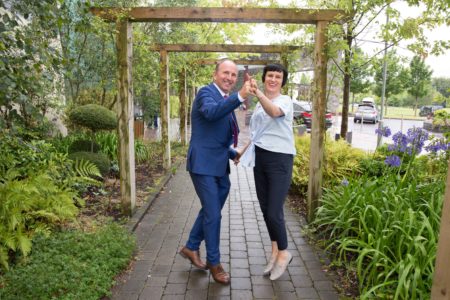 Speaking about the upcoming Gala Fundraising Ball, Miriam Forde, CUH Charity said: “Since we had our first sell-out Gala Ball in 2015, the event has grown each year to become one of the most highly-anticipated not-for-profit events in the social calendar in Cork and the region. We are absolutely delighted that its huge success has had such a significant impact on our hospital and on the lives of our patients at CUH.”
Theo Cullinane, CEO, BAM Ireland, main sponsor of this year’s event, added: “BAM Ireland are delighted to sponsor the CUH Charity Gala Ball, a spectacular event for a very worthy cause”.

Over 300 guests will attend the event at Fota Island Resort where they will be treated to a five-course meal. There will also be fantastic entertainment from The Pat Fitz Band and a special guest MC. Raffle prizes on the night will include hotel packages for The Park Hotel, Kenmare, Parknasilla, Sneem and Ashford Castle in Mayo as well as sought-after tickets for a Manchester United game.

Tickets cost €175 per person and €1,750 per table of ten people. There are a limited number remaining and they can be purchased by emailing miriam@cuhcharity.ie or by calling 021 4234529.

USELESS DEGREES: Apprenticeships can be better and cheaper than University – Cork MEP
Previous Post
HOUSING CRISIS: OAPs concerned about being booted out of houses and into nursing homes – to free up houses for YOUNG people – warns Cork opposition TD