An East Cork based fishmonger has been shortlisted to win a national title recognising excellence in his profession. Alan O’Loughlin from Ballycotton Seafoods in Cork has been named along with seven other finalists hoping to be selected as Bord Iascaigh Mhara (BIM) Young Fishmonger 2018. 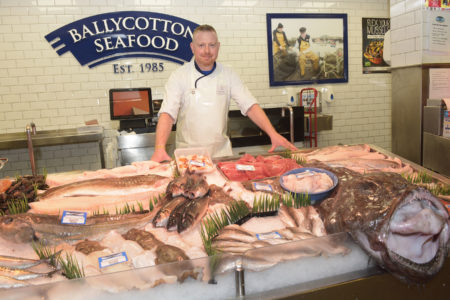 Alan is based in Ballycotton Seafood shop in the in the buzzing English market in Cork, renowned for seafood. Ballycotton also sources direct from its own boats, thus ensuring top quality product and freshness from the boat to the table.

Originally a qualified butcher, Alan soon found that he enjoyed working with seafood, and used his skills to transfer into the seafood sector. In 2015 he moved to Ballycotton Seafood and has loved his job ever since.

Due to the diverse nature of customers in the English market, Alan offers a wide range of species and formats, up to 40 different types in fact. This includes his own smoked salmon which is produced in their smokehouse in Garryvoe.

Alan says ‘We have a superb team in the shop, and I am extremely proud of it. I’m delighted to be in the final and I hope I can be a great ambassador for the seafood industry’.

Eight fishmongers from around the country will now compete for the following coveted titles; ‘Independent Seafood Specialist 2018’ and‘Supermarket Seafood Counter 2018’ to be presented at ‘BIM’s Seafood Retail Awards on the 16th November in the Wineport Lodge, Glasson, Athlone. For the first time in the competition, there are a record number of female finalists with three female finalists out of four in the Independent seafood specialist category. Overall there is an even split between the genders with four female and four male finalists.

The finalists are as follows:

Jim O’Toole, BIM’s Chief Executive outlines the motivation behind the annual competition; ‘As a country, we need to celebrate the skills of our seafood industry and the BIM Young Fishmonger competition is designed to reward and recognise talent as well as also encouraging and training new entrants into a sector which has experienced a marked rejuvenation in recent years. With more than 500 independent and supermarket seafood counters nationwide and domestic sales reaching €245 million, the sector is responding to the increased market demand for seafood. BIM’s role in upskilling and mentoring fishmongers will enable the sector to realise its full potential. We wish all our talented finalists good luck to in the last phase of judging. We are looking forward to announcing the 2018 winners at the BIM Seafood Retail Awards in November. ’

The eight finalists will now receive in-depth visits by the judges to assess their knowledge of seafood, their understanding of quality issues, skills, techniques and customer service. The final stage of the Young Fishmonger competition will take place in October and will rigorously test the finalists’ skills, with each fishmonger required to fillet and prepare a range of fish and shellfish under time constraints as well as discussing their future career plans and ambitions in the seafood sector.

In addition to a higher female participation in the competition this year, there are two finalists – Anne Stephens from the Fish Market, Maynooth and Katarina Curmova from Dunnes Stores, Longford who have achieved a place in the finals for the second year running. Both Anne and Renêe’s husbands, George Stephens and James Kirwan, were also previous winners of the competition.