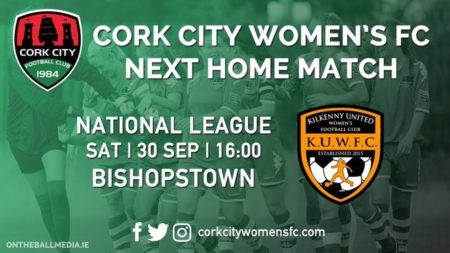 Cork City Women’s FC return to Continental Tyre’s Women’s National League action as they host Kilkenny United WFC this Saturday 30th of September at Bishopstown
with a 4pm kick off.

Having had a three week since the FAI Cup quarter final victory over Peamount, Cork City Women’s will be hoping to build on that victory as they get back into league action this Saturday.

Defender Kate O’Donovan feels that despite the lack of games her team has used the break to their benefit. “The preparation for the weekend is going really well we have put a good few weeks after the Peamount game and the intensity is getting better and better each week,” said O’Donovan.

The Bandon native is hoping to keep her place in the team after a good run of form in recent games having missed a large part of the early season. “Personally it was very tough at the start after getting concussed and being out for a while but since then it has been good for me being properly back training with the girls and getting some game time again has been great.

Now we need to work hard to get as many points as possible in the WNL and get ourselves to the cup final in the Aviva Stadium.,” added the first year Biological Sciences student in C.I.T.

Cork City WFC have been drawn away to Wexford Youths Women’s FC for the FAI Continental Tyres Senior Cup Semi-Final. The match will be held on October 7th at Bunclody
FC with a 3pm kick off.

BEEHIVE APP: ‘ApisProtect’ wins Bank of Ireland Cork IGNITE Business of the Year 2017
Previous Post
CORK EXPERTS: from I.N.F.A.N.T. will speak at ‘Brain Monitoring and Neuroprotection in the Newborn’ Conference
Next Post
Tweets by @TheCork_ie