Members of the Irish-speaking community from Cork city met with their local representatives this week to voice their concerns around Irish language and Gaeltacht funding as Clinic Na Gaeilge came to Kildare Street in Dublin.

The ten-hour mobile clinic at Buswells Hotel saw Peadar de Blúit of Gael-Taca sit down with local representative Senator Tim Lombard to ask for their support for an Irish Language and Gaeltacht Investment Plan which could create over 1,150 new jobs. 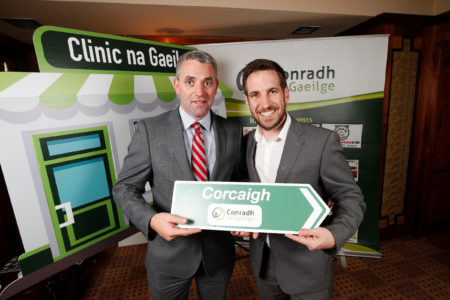 Pictured is Peadar de Blúit of Gael-Taca from Cork who met with his local Cork representative Senator Tim Lombard at Clinic na Gaeilge 2017 at Buswells Hotel on Kildare Street. Organised by Conradh na Gaeilge, the ten-hour mobile clinic saw members of the Irish-speaking community from around the country sit down with their local politicians in a bid to secure budget funding for an Irish Language and Gaeltacht Investment Plan which could create over 1,150 new jobs.Picture Conor McCabe Photography

Local representatives from 27 constituencies across Ireland travelled to the capital to meet 83 TDs, Senators and representatives in a bid to secure funding of €5.3 million for the plan in Budget 2018.

“Clinic na Gaeilge brings the voice of the Irish-speaking community to the seat of power, where they can air the local issues that matter to them most,” said Peadar.

“It was good to sit down as Gaeilge with Tim and encourage him to make investment in the Irish language and in the Gaeltacht a priority for the Government in Budget 2018.”

“It will also provide essential resources towards the language planning process, and afford the public many opportunities across the country to use Irish,” said Dr Comer.

“Irish language and Gaeltacht employment authorities have seen their resources slashed by up to 70% since 2007.

“It is time to honour the Programme for Government and invest in our Gaeltachts and in our language.”

“As well as the representatives of many constituencies who are joining us today, other Irish speakers have been phoning their local politicians, calling into their local drop-in clinics, and sending personal emails or tweets,” said Peadar Mac Fhlannchadha, Advocacy Manager with Conradh na Gaeilge.

“Like Clinic na Gaeilge, this is all tremendously enormously important work before the Budget is decided.

“We are stronger as a community when we work together on these core issues – ní neart go cur le chéile.”

Conradh na Gaeilge and their local representatives are calling on the Government and on the Minister for Finance, Paschal Donohoe TD, to allocate €5.3 million in funding to the Irish Language and Gaeltacht Investment Plan, as agreed by 87 Irish language and Gaeltacht groups, in Budget 2018.