FARMING: State to provide €112,000 towards Agricultural shows in Cork

Cork-based Fine Gael Senator, Tim Lombard, has announced that €112,000 has been granted to Cork for agricultural shows next year.

Senator Tim Lombard began his political career as a Cork County Cllr and is now a Senator.

This is part of a national allocation of €812,000 by the Minister for Rural and Community Development, Michael Ring TD, which will benefit almost 120 agricultural shows throughout the country in 2018.

Senator Lombard said: “Agricultural shows are hugely important to our rural economy. We know the economic benefit they bring to the local economy here in Cork, with surrounding towns and villages benefitting hugely from each show. 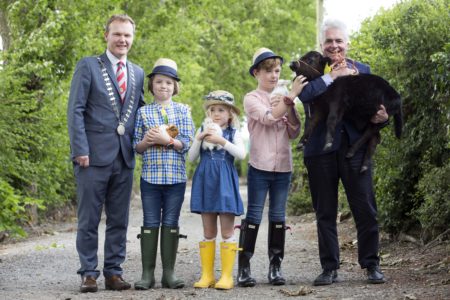 File photo:
The then Mayor of the County of Cork Cllr Seamus McGrath, Greg, Liah and Marc O’Toole and Chairman of the Munster Agricultural Society Gerard Murphy pictured at the launch of the 2017 Cork Summer Show sponsored by Cork County Council. More than a thousand animals were onsite for this years Cork Summer Show which took place on Saturday 17th and Sunday 17th June at the show grounds at Curraheen
Picture Clare Keogh

“The Government considers this funding an important investment in rural communities and I am delighted that my colleague Minister Ring has provided this funding.

“This funding allocation takes into account the fact that smaller shows have particularly struggled in recent years. This funding will be a great boost to these events and I commend the dedicated volunteers who work so hard on making the shows happen every year.”
Minister for Rural and Community Development, Michael Ring TD said: “This represents a substantial investment in rural communities and in the rural economy by the Government. I know that this funding will provide a huge boost to the agricultural shows that are such an integral part of our rural culture.

“I know that many shows have struggled in recent years as a result of adverse weather and increased costs. These shows have been a mainstay of the local summer and their absence has been keenly felt. I hope that this once-off funding will help prevent that situation recurring next year and will help these shows to get back on a sound footing.”